A website dedicated to athletics literature / The 100-Up Exercise 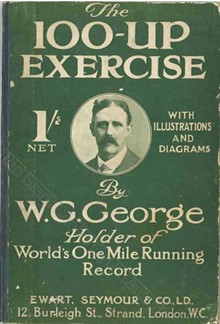 Walter Goodall George. The "100-Up" Exercise. A Comprehensive Description of the "Century" Home Exercise. 1913.

Walter George was born in Calne, Wiltshire, on 9 September 1858.  At the age of 16 (i.e. in 1874/5) he became an apprentice in a Chemist shop, which required a 14-hour day with only a one-hour break, plus evening study.  This was the time when the new "amateur sport" was at its fashionable height, and despite his lack of free time the young Walter George had no intention of being excluded from sport; and he entered walking, running and cycling races.  Not having enough time to go out and train properly he devised a running exercise that he could do on the spot and so took up minimal time - the "100-Up" exercise - and did it in the back room of the chemist's shop.  From such modest beginnings, Walter George became one of the greatest athletes of his age - or any age.  Many athletes become famous in their sport, but few can claim that their success influenced the development of their sport - Walter George was one who did.  In the late 1870s/early 1880s, he and Lon Myers demonstrated to the world that amateurs could run as fast, if not faster, than the professionals, and the sport of athletics took a new, and even more confident, turn.  Walter George was British Champion (i.e. won the AAA Championships) for 4-Miles in 1880, 1882 and 1884, also won the 880yds in 1882, and the 1-Mile in 1880, 1882 and 1884 - thus, in 1882 he was British champion over every distance from 880yds to 4-Miles.  He ran for Worcester and, later, for Moseley (in Birmingham).

There were to be re-matches with William Cummings, races in the USA and Australia, and many more successes, and some failures, but Walter George retained the reputation and aura of a supreme champion all his life and retired in 1888; and, at the age of 56 (1914), he was described as "still an active Athlete".  He died in June 1943 at the age of 84.

Further reading.  For a full biography of Walter George, see -

The place of George’s “100-Up” Exercise”,in the history of Athletics literature:

The title is a bit misleading, for this small book also includes a year-by-year review of Walter George's athletic career, and an autobiographical note, as well as a description by George of his 100-Up Exercise, its invention, development and application.  The credit that Walter George gives to his 100-Up Exercise in developing his athletic prowess may seem far-fetched - can one really become a successful runner by running only on the spot? - but the 100-Up Exercise has proved itself to have remarkable staying power.  It is popular today with many personal trainers, and fitness gurus, and there are websites that will tell you how to do it (http://www.huffingtonpost.com/2014/06/04/100-up-running_n_5406664.html).  It even has web-sites devoted to it (http://100up.info/how-to-do-the-100-up) and (http://hundredup.com), and you can even learn how to do it on YouTube - https://www.youtube.com/watch?v= xv5SqiKrhmk,  https://www.youtube.com/watch?v=r1EBrxUCiGs and http://huntergatherer.com/the-100-up-technique-28video29/.

Although Walter George published the details of his "100-Up Exercise" in 1913, it was well known long before that.  Mike Murphy ("Athletics Training", 1914 pp. 8-9, - see the Athlos list of books) wrote that he had used the exercise "with great success" with American runners in 1908 and in 1912, as both winter training, and on board ship that brought the USA athletes to Europe for the Olympic Games in those years.

Things are now attributed to Walter George's 100-Up-Exercise that even he did not claim; it can now apparently help technique as well as improve aerobic fitness, by re-training the stride-cycle to eliminate a too pronounced heel-strike.  One thing I learned when using it is that it is much harder than it looks.

Walter George's 100-Up Exercise seems to be at least as popular today as it ever has been, and has now been in use for 140 years.

The "100-Up Exercise” was first printed in 1913, but it is the 1935 edition that we have scanned here.  It is superior to the First Edition in many ways; the opportunity was taken to rephrase some sections to make their meaning clearer, some new text was added, numbers were added to the photograph of Walter George and William Cummings at the start of "their great race" in 1886, so that the various people on it can be identified but, most of all, the unaccredited drawings of the 100-Up Exercise were re-done.  They needed it too, for the artist had previously drawn Figures IV and V with the wrong arm forward!

The Wonderful Career of W.G. George.

Effects on the Muscles and Physical Organs.

How and Where to Practise.

Preliminary Practice for the Exercise.

What the Exercise Teaches.

Portrait of W.G. George in his athletics kit at the age of 50 [he looks much younger!]

George describes the Major and Minor versions of the "100-Up" Exercise; the Minor version is a preparatory version in which the arms are not used.  When teaching the exercise, however, there seems to be a need for a Minor version that employs the arms too.

The cover illustration on the Athlos Book Search page is of the 1913 edition.

The "100-Up" Exercise. A Comprehensive Description of the "Century" Home Exercise.