A website dedicated to athletics literature / Athletics in the UK : The Rise and Fall of the BAF

Athletics in the UK : The Rise and Fall of the BAF 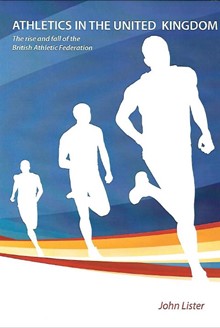 John Lister. Athletics in the United Kingdom: The Rise and Fall of the British Athletic Federation. 2011

John Lister was a talented athlete in the 1960s, and for more than fifty years was an outstanding officer and administrator in club, national, and international athletics.

Born and living in Wales, he set a new Welsh Record in the High Jump and was a many times winner at the Welsh Athletics Championships - in the High Jump, Decathlon, and High Hurdles; and was only 1cm away from being Welsh Champion in the Long Jump too.

His deep involvement in athletics was not confined to his role as an athlete as he also became involved in athletics administration and governance; and, while still in his twenties, he played a pivotal role in the amalgamation of two Cardiff athletics clubs, creating Cardiff AAC, which was to become one of the largest and most successful clubs in Britain. He was the club’s Treasurer for almost forty years, served on committees of the Welsh AAA, the governing body of the sport in Wales and, in 1986, became the Honorary Treasurer of the AAA.  His experience in the sport led him to the belief that the management structures of athletics in Britain were in need of major revision, and this led to a significant role in creating the British Athletics Federation, of which he was the treasurer from its creation until 1996.

In addition to his club and national roles, he represented the UK on the European Athletics Association’s (EAA) Council for three 4-year terms between 1995 and 2007, during which time he was responsible for the organisation and delivery of the European Athletics Championships in Munich in 2002 and in Gothenburg in 2006.

His contribution to athletics was recognised by the Queen in 2010, when she created him a Member of the British Empire (MBE).

The place of Lister’s “Athletics in the United Kingdom: The Rise and Fall of the British Athletics Federation” in the history of Athletics literature:

The sport of athletics in Britain has not always been at peace with itself and the conflicts, when they have come, have seldom been between the various branches of the sport (say, Cross-Country running, and Track & Field athletics) but between the various geographical areas, regions and UK Home Nations.  There were, of course, major disagreements between the men's and women's organisations in the first half of the 20th century.

In 1866, however, it must have looked relatively straightforward when the Committee of Nine created the Amateur Athletic Club, the first governing body of athletics in the world, with Guy Pym, from the War Office, as its first Hon Sec.  They created an annual national championship, plus open meetings with handicap races, created rules on amateurism, set out rules for membership and published plans for their own ground.  It seemed simple enough to set membership at 3 guineas for "Residents" (i.e., Londoners) and 1 guinea for "Country Members" (i.e., those outside London); but it was such a clear signal of their London centric attitudes that those in other parts of Britain were bound to object eventually.  The AAC didn't really fail; it did what it did quite well but, as a National Governing Body, its vision was too limited - and it certainly did not represent the clubs and their athletes from around Britain.

The creation of the Amateur Athletic Association at a meeting in Oxford in 1880 put in place what they hoped would be a truly nation-wide governing body, and this meeting is summarised in the AAA's "Fifty Years of Progress 1880-1930"; but Montague Shearman made it quite clear that even at that first meeting the new organisation did not get the unanimous support of the whole country; Oxford University did not support it at first, and Cambridge University’s support was only lukewarm.  London Athletic Club’s support was less than lukewarm, and only the North of England and the Midlands were strongly supportive.  In 1927 in a speech at the A.A.A.’s AGM Montague Shearman said -

as long as the North, Midlands and South remain friends, as long as the new County Associations are friends
and not enemies of the A.A.A. and as long as harmony and good feeling prevail, we shall go on and prosper.

. . . and he said it because he knew from his 39 years in the AAA that fault lines were there, and always had been.

Over time, the Scots, Irish and Welsh set up their own associations; then women created their own independent associations too; cross-country did the same, and other disciplines were added - tug-of-war, road running, fell and hill running, each with their own associations, so, one hundred years after the 1880 meeting at Oxford, the sport of athletics in the UK had well over 20 governing bodies that had authority over all the major disciplines, both the genders, and all the regions and Home Nations, plus, of course the A.A.A. itself; and there was pressure from outside (the Sports Council) and from within the sport for a more rational organisation. Various failed attempts had been made to rationalise the traditional structure until an initiative by the leading clubs, through their umbrella organisation the British Athletic League, forced the Amateur Athletic Association (AAA) to grasp the nettle.

On 1st October 1991, the organisation of the sport of athletics in the United Kingdom underwent a fundamental change with the launch of the British Athletic Federation (BAF). After many twists and turns, the sport accepted the need for it to modernise and the BAF was created to act as its governing body throughout the UK.

Sadly, the BAF had been born in controversy and went into administration in 1997, a mere six years later. Out of the ashes of the BAF, an entirely new body, UK Athletics, was formed.

This is an important book for it traces the history of these events, and although they may be viewed as a failure, they did result in a badly needed rationalisation of the organisation of the sport. For the first time, there was no distinction between men’s and women’s organisations (even, for the first time, joint official championships were held) and the world body, the IAAF, could recognise a clear, and simplified, framework in one of its most important members.

The text is drawn from the official and personal records of the author and is divided into two parts. Part one describes the historic attempts to rationalise the sport and the steps taken between 1982 and 1991 that led to the formation of the British Athletic Federation. During this period the commercial activities of the governing bodies underwent a dramatic improvement and these are described in part two. Part two also describes the circumstances that ultimately led to the demise of the BAF and its replacement by UK Athletics.  This text is also important because it is based on the official minutes of the meetings that it describes, and that collection of minutes is in itself unique.  Only John Lister had copies of all this source material, and without his careful collection and stewardship of these meeting records and minutes, this story could never have been so fully and accurately told.

Athletics in the United Kingdom: The Rise and Fall of the British Athletic Federation.