An Autobiography of an Ancient Athlete & Antiquary 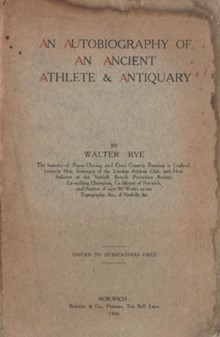 Walter Rye, An Autobiography of an Ancient Athlete & Antiquary. 1916

Walter Rye was born in Chelsea in 1843, the seventh child of Edward and Maria (née Tuppen), and went to school, when “very young”, in nearby Eaton Square.  We get some sense of the age he lived in by knowing that as a child he was taken to the Duke of Wellington’s funeral, and that he threw stones at Thomas Carlyle.

He seems always to have been attracted to the athletic, and he tells of walking one mile in his everyday clothes in 11 minutes at the age of 15, and by the age of 17 beat all his contemporaries at school in the sprints; but he was also eccentric, even at an early age, and when he was winning his sprints in 1860, as a 17-year-old, he already sported a purple streak in his hair.

As this is an autobiography it would be out of place to give too much away here about his life but, very briefly, he was one of the outstanding, and best known, athletes of his age; indeed, his obituary in The Times records that “he won over 100 prizes for walking, running, and cycling, and in 1868 he held all-world walking records from one mile to seven miles.”  He was also a significant administrator in the sport, and wrote 80 books and pamphlets, and was at one time Mayor of Norwich.

He was also a well-known "character" and, in marginalia written in one of the copies of this book, F. V. Rainsford writes -

WR was a capital walker with a caustic wit, very definite opinions & Johnsonian vigour of expression,
- but would have been better liked had he been less bitter & combative, less acid to his critics, and
less prone to merciless jibe and retort.

Caustic and combative he might have been, but he was also successful and achieved a great deal; but one cannot help but be touched by the poignancy of one of his observations 1916 when he wrote that it was “sad to think how little one has accomplished in a long life”, but he was pleased that he had “introduced popular paper-chasing to the public.”

In 1916 he was so ill that he was forced to live “an invalid life” throughout the summer and autumn, and in December he finishes his autobiographical diary with the comment that his “busy life [was] fast drawing to a close”; he was 73 at the time.  In fact he was to live for another 12 years, dying in February 1929.

The place of Walter Rye’s “An Autobiography of an Ancient Athlete & Antiquary” in the history of Athletics literature:

There are several reasons why this book is important - his position as athlete and administrator make him an important person in the history of athletics, and he one of the few who give us eye-witness accounts of the personalities and events of the time when the Amateur Athletic Club was formed, and when the great Amateur Age emerged.  He also accepted The Times newspaper’s description of him as “the father of paper-chasing running” though that now needs to be seen alongside Roger Robinson’s work on “Young Sam Butler and the origins of modern running”(2012) which describes paper-chasing at Shrewsbury School 35 or more years earlier.  See -

It is almost certain, however, that Walter Rye had no knowledge of the earlier appearance of paper-chasing and genuinely believed, as did others, that he was its “founder.”

Walter Rye gives us an almost day-by-day account of himself as a boy, youth and man at the centre of 19th century athletics, and he gives fascinating insights into some of the people about whom we, otherwise, would know so little; he tells us, for example, about J. G Chambers whom he describes as a “strange character” and describes H.F. Wilkinson as “a buffoon” as well as commenting on “Charlie” Westhall’s death.

"An Autobiography of an Ancient Athlete & Antiquary” had an original print-run of only 200 copies, and it has never been reprinted.  He limited purchasers to one copy only, and so this has always been a rare book.  It became even more tantalising by his refusal to send out any copies for review, and only giving out the copies that had been purchased on the understanding that “the work is not to be reviewed”; and to the best of my knowledge it never was.  He describes it as “only a mass of details of a busy life” but hopes that it might be useful to future generations, “just as the minor details of Pepys are to us nowadays” (i.e., in 1916).

Although the original material was accumulated in diaries that he kept from his schooldays, he began the process of creating this “digest” of them in April 1916, and completed it eight months later in December.

The items that have some bearing on sport, and athletics history in particular, are to be found primarily in the first 66 pages but, for those interested in his family history and the history of Norfolk, there is very much else besides.

The book consists of 219 pages of text, 5 pages of introduction including the table of contents, and seven pages that are devoted to a bibliography of his published work.  It also contains 26 images, most of which are full-page black and white photographs, but these include two line drawings of Walter Rye in action:-

1 August 1866 at the National Olympic Association meeting at Crystal
Palace where he won the Half-Mile, and the 1-Mile, competing for
King’s College Rowing Club, and

20 June 1868 at the AAC’s Championship meeting at Beaufort House
where he won the 7-Miles, competing for London Athletic Club.

An Autobiography of an Ancient Athlete & Antiquary