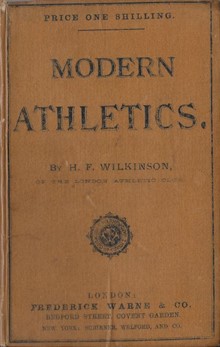 Wilkinson is described as ‘of the London Athletic Club’.  He is clearly closely involved in all aspects of athletics and attends many athletics meetings, commenting on their efficiency, and on the timekeeping.  He was twenty three when this book was published.

The place of Wilkinson’s “Modern Athletics” in the history of Athletics literature:

For students of this era of track and field athletics this is an invaluable text.  Wilkinson compiles a history of the sport, a brave undertaking for a sport so young, and his chapter on the management of an athletics meeting is the earliest of its kind.  His 45-page chapter on the athletics season of 1867-68 is also unique.  There is no similar review of an athletics season either before, or after this one.  To the 21st century eye he makes the surprising statement that the athletics season starts at the beginning of October, and finishes at the end of April, with a few meetings stretching into May and June.  He then he goes on to give details of 92 athletics meetings before the beginning of July.  His review of statistics is equally impressive, but his lists of records are, if anything, the place where he makes his most lasting legacy.  He compiles the first list of records for –

-          (No professional walking times are given because ‘with the exception of C. Westhall of London, G. Davidson of Hoxton, and a few others, the style of going of many has been doubtful’).

-          (No record of Professional Jumps without artificial aids could be found).

-          Best Amateur Throwing Performances on record – Putting the Weight and Throwing the Hammer.

-          (‘No reliable records of Professional [Throwing] performances are extant, as the method of putting, and the weight of the stone and hammer vary so much.’)

For running events, Wilkinson gives the distance, time, athlete’s name, athlete’s age, height and weight, the date and place where the performance took place, plus ‘remarks’ that describe the competition, thus setting an extraordinarily high standards that very few of the statisticians who were to follow, were able to match.  In his revised edition of 1875 he even adds the name of the time-keeper!

In his chapter on The Rise and Progress of Modern Athletics’, Wilkinson outlines the history of the various elements that would go to make up the track and field meeting: the Crick Run at Rugby School, the Hurdle and Steeplechase competitions at Eton College, the one mile race at Marlborough College (and in a later chapter he writes about the shot and hammer recently been introduced from north of the Tweed (i.e. Scotland)).  He writes about the way that the athletics meeting emerged at Sandhurst, Durham University and Exeter College, Oxford, and at the Public (i.e. private) Schools, led by Cheltenham College.  In London the Honourable Artillery Company Sports, and the West of London Rowing Club were the first to put on athletics meeting; the latter, for winter training for its members but was open to all-comers.  The first club was Mincing Lane which soon became the London Athletic Club.  Gentleman Amateur Championships were held from 1866 for 100yds, Quarter Mile, Half Mile, One Mile, 4 Miles, 7 Mile Walk, 120yds Hurdles, High Jump, Wide Jump, Pole Jump, Hammer Throw, Putting the Weight.  Wilkinson refers to The Laws of Athletics, but does not list them until his revised edition of 1875.

Already, though, much of the language of later Track and Field Athletics is already in place.  He writes of the sprint, middle distance and long distance events.  Athletic meetings have judges and referees, and press.  The track is already 440yds (150yds long and 70yds wide).  The hurdle race is standardised at 120yds with ten flights of 3ft 6inch hurdles.  The High Jumpers had three attempts at each height, and the shot and hammer were 16lbs in weight.  Heats were run, and races started by pistol.  Wilkinson writes, “There is scarcely a cricket or football-club throughout the kingdom which does not now hold its annual athletic meeting”.  In a little over fifteen years the sport of amateur athletics had swept the country, but he quotes two different definitions of an amateur, and it was this issue, rather than the purely athletic ones, that would cause the new sport the most difficulty in the years ahead.

There are also excellent chapters on the management of athletic meetings, training, walking, and running (for sprints, medium, and long-distances), jumping and throwing.