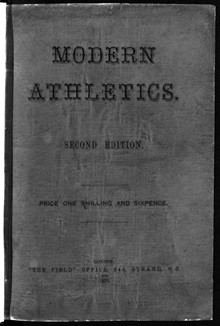 Wilkinson is described as ‘of the London Athletic Club’.  He is clearly closely involved in all aspects of athletics and attends many athletics meetings, commenting on their efficiency, and on the timekeeping.  He was thirty when this book went into its second edition.

The place of Wilkinson’s “Modern Athletics – Second Edition” in the history of Athletics literature:

The first edition of Modern Athletics was an in-depth description of athletics as it was in 1867-8.  One omission, however, was to include a copy of The Laws of Athletics, that governed the major meetings and championships.  That omission was remedied in the second edition of 1875.  The Laws that he gives are almost identical with those given by Pilkington nine years earlier - except for a rewording of Law 13, and the replacement of the word 'stone' by 'weight' - which shows just how stable the laws of the sport were over these early years, and we can see that the Laws later adopted by the Amateur Athletic Association in 1880 were not a new beginning for the sport but a continuation of an older order. Wilkinson's Laws do, however, have one significant change; the definition of an amateur has become Law 17 and includes the words "...nor is a mechanic, artisan or labourer" in an attempt to disqualify those who were 'professional' by virtue of their work. It was a battle that would divide the sport for years.

This comprises Chapter IX of the text, and Wilkinson writes that they were the Laws in force at the Amateur Champion Meeting, and Oxford and Cambridge Universities.  There are 17 Laws, including a definition of an amateur.  These Laws are the basis of those later adopted by the Amateur Athletics Association in 1880.