Athletics of To-Day for Women 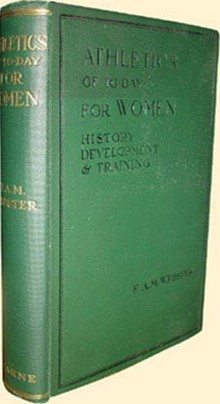 The place of Webster's “Athletics of To-Day for Women. History Development and Training”, in the history of Athletics literature:

This is the second half of a matching pair of books, the first half being Athletics of To-day. History, Development and Training, published the previous year.  It is clear that Webster had not planned the second "half" when writing the first, but he captured the spirit of the age by writing the first book for women in athletics and using the same structure as that for men.  Here, as in the previous book, there is historical analysis, technique, science, and training advice, and he gives women's athletics the same consideration and weight as men's.

In doing so, Webster breaks new ground.  This is one of the most important books in the history of women's athletics.

In addition there are 250 illustrations, and many of these images cannot be found anywhere else.

The book largely follows the structure of - Athletics of To-day. History, Development and Training.  It has three parts; the first, and largest, is a history of women's athletics up to the British Women's Inter-University Championships of 1930.  Part Two covers the Tack Events, including Walking; and Part Three covers the Field Events, including, strangely perhaps, the standing jumps, but included, perhaps, because the Standing Long Jump was in the programme for the 1926 Women's World Games in Gothenburg.

Modifying the training advice, etc., to apply specifically to women poses no real problem for Webster, who had two daughters, both of whom he encouraged to be athletes; the most difficult task must have been following the model of his earlier book for men, and compiling an extensive appendix of records for women.  Previously, women's performances had been only sketchily reported and rankings and lists of records were rudimentary to say the least.  Nevertheless, Webster does produce an extensive list of records from around the world and (together with the 250 illustrations) it is one of the most outstanding features of this book.

Women's Inter-University Board of GB and Ireland, Championships (winners, 1923-1930)

Athletics of To-Day for Women