A website dedicated to athletics literature / The Pedestrian’s Record 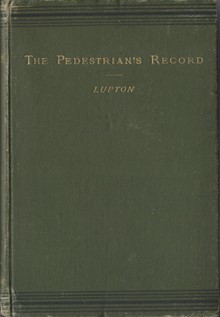 James Irvine Lupton and James Money Kyrle Lupton’s, “The Pedestrian’s Record; to Which is Added a Description of the External Human Form”, 1890

James Irvine Lupton (1830/1-1900), and his brother, James Money Kyrle Lupton, were essentially anatomists, and James Irvine Lupton was a Fellow of the Royal College of Veterinary Surgeons who wrote extensively on horses.  He also corresponded with Charles Darwin.  They were both based in Richmond, Surrey, and were both members of London Athletic Club.  JMK Lupton also played Tennis, and was an authority on Chess.

The place of the Luptons’ “The Pedestrian’s Record” in the history of Athletics literature:

This is an attempt to base training and coaching advice to athletes, on scientific principles rather than on traditional, word-of mouth methods, handed down from coach to athlete, some of which were generations out of date; and is a very useful source, telling us what common practice was in 1890 and what the new ideas were.  In addition, though, the section on results and statistics is particularly good, and for some competitions is the best we have.  It was updated shortly before publication in 1890.

The book comprises of the following sections

Athletics – containing a history of Athletics, a basic overview of physiology, and the ‘various tissues’ of which athletes should have some knowledge.

Athletic sports in England – more history – Athletic sports since the days of Charles II.  Description of current athletes and their standards.  Laments at the schism between the amateur and professional branches of the sport, and wonders if it is necessary.

Before Commencing to Train – preparatory work in the gymnasium – importance of all-round development – mental culture – the ‘nervous centre and nerves’ – ‘there can be no doubt that the men of the past were stronger than those of the present – anecdotes of strong and fit men of the past – description of sprinting and sprinters – comments on middle and long distance runners – diseases, sleep, food, alcohol and smoking – physiology – blood, oxygen, body fat, glands, lungs, food – importance of all-round development (again).

The Mile - From Two to Ten Miles -

Dietary – more long quotes, outlining what should and should not be eaten

roads – use of ice – Jacob’s Oil and Elliman’s Embrocation – contusions – the heart – respiration – importance of exercise to the nation and its children.

Appendix – Anatomy – the Muscular System of Man – [there is no attempt to relate these topics to Athletics].

Addendum – [update of results just prior to going to press]