The Athletes and Athletic Sports of Scotland 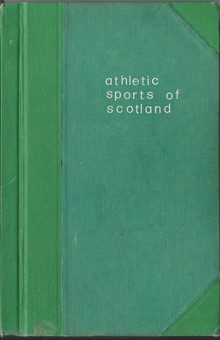 William McCombie Smith, “The Athletes and Athletic Sports of Scotland, Including Bagpipe Playing and Dancing”, 1891

Born - 7 Sept 1847, in Lumphanan, Nr. Aberdeen, McCombie Smith became Headmaster at Blackwater School, (nr Glenshee).  He was also a thrower and lifter of heavy weights and was known to have lifted the heavier of the two Dinnie Stones (435 lbs (197.3 kg), unassisted.  He was also author of Memoir of the Families of M’Combie and Thoms, originally M’Intosh and M’Thomas, 1890; Men or Deer? In the Scottish Glens: or Facts About the Deer Forests, 1893; and The Romance of Poaching in the Highlands of Scotland: as Illustrated in the Lives of John Farquharson and Alexander Davidson, the Last of the Free-Booters, 1904.

The importance of McCombie Smith’s “The Athletes and Athletic Sports of Scotland, Including Bagpipe Playing and Dancing” in the history of Athletics literature.

Athletes and Athletic Sports of Scotland is a truly exceptional work, the product of a rigorous, eclectic Scot, as far from the hallowed halls of Oxbridge as it is possible to imagine. It should be essential reading for all students of track and field athletics.

McCombie Smith provides us with the most accurate account of Scottish Games of the 19th century that we are ever likely to read.  Not, alas, of their Border counterparts, of which we have record, but little in the way of detailed description.

My main criticism of this book is that it is all too brief. This is because its author devotes chapters to non-athletic activities such as highland dancing, bagpipe-playing and feats of strength.  It is also clear that, as a thrower, he has less interest in running and jumping.  In the case of the former, this is no great problem, for few records of note were ever achieved on the rough, bumpy Games fields of rural Scotland.

Mc Combie Smith makes what is a unique attempt to estimate the performances in Games throwing, but is hampered by issues such as the range of weights, length and rigidity of hammer shafts, and most importantly by the fact that few competitions were ever conducted on level ground. This possibly causes him to be unduly severe, categoric in his belief that that no Scot had ever launched a 16lb. shot to 46 feet under competitive conditions.  It is some reflection on the looseness of records in that period that Dinnie’s training mark of 49ft. 6in. on the Duke of Kerr’s bowling green in 1868  was listed until well into the 20th century; though fortunately there is no record of the Duke’s reaction.  It is however clear that he was well capable of 46 feet until well into middle age and over 120 ft. with hammer.  Perhaps the fact that Dinnie was McCombie Smith’s brother in law may have coloured his opinion.

This being said, McCombie Smith is certain that Dinnie was the greatest athlete of the 19th century, and it is difficult to argue with his opinion.  Unbeatable in shot, hammer and caber, he was the best high –jumper of his era, possibly the world’s greatest all-round wrestler and an outstanding weight-lifter. He continued to beat most of Scotland’s “heavies” until well into his fifties.

McCombie Smith shows less interest in the jumping events, and gives the firm impression that all horizontal jumps were conducted on a ground to ground basis.  This being said, it is difficult to understand his easy acceptance of jumps of over 23 feet in long jump, impossible under such circumstances.

He is possibly the first writer to offer fresh views on meet-presentation, years before sound-systems were invented. Most of his suggestions are eminently sound, though it is doubtful if they were acted upon by conservative Games-organisers and their aristocratic patrons.  One of the less-realistic of his ideas is his suggestion that a series of paper cross-bars be deployed in high jump, with jumpers gaining credit for the number which they failed to dislodge, thus taking the indefinite element from the vertical jumps.

McCombie Smith is one of the few writers of the 19th century to be critical of the amateur movement.  “In an experience of about twenty five years the author…… has known hundreds - if not thousands - of athletes who have won money at professional sports; he has never known one whose profession was professional sports.” And “the only men who were called athletes in ancient Greece were those who made athletics their profession”.  Finally, “What about the companies of star amateur athletes who go all over the world giving performances for gate money?  They must belong to one of two classes; either they are men of independent means who pay their own expenses and give over their money for charitable objects, or they are men who get their performances paid for by their expenses.”

It is worth reading this chapter over and over again, for it represents one of the few attempts by a working-class athlete of the period to rebut amateurism and to reveal its early hypocrisies.

The Athletes and Athletic Sports of Scotland, Including Bagpipe Playing and Dancing