A website dedicated to athletics literature / The Athlete for 1869 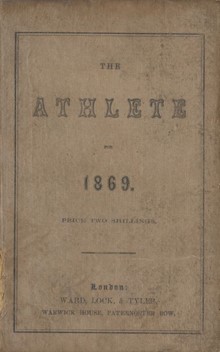 It is probable that A.J. Wilkinson is the compiler of this volume; on p. iv, of the 1868 volume he asks secretaries of Athletic Clubs to send in results of meetings held at their clubs for next year’s book (i.e., this one).  However, there is no mention in this 1869 volume of its author or compiler.  In the absence of any alternative explanation, it seems reasonable to suppose that as A.J. Wilkinson requested these results be set to him, that he actually compiled them.

A.J. Wilkinson was born in 1835 in Co Durham and went to Shrewsbury School and St John’s College, Cambridge.  He was a member of the Amateur Athletic Club and in May 1868 took over as its Secretary.  He was also an elected member of the London Athletic Club committee (other committee members included E.J. Colbeck, W. Rye, and W.G. Grace and the Secretary was Walter Chinnery).  During 1868 he acted as a judge at LAC’s meetings and in 1869 at the Cambridge University Sports, and many others.  Wilkinson was a sprinter who ran races over 100yds, 120yds, 150yds, 300yds and 440yds, in 1866 and 1867, but without any particular success; but, as Secretary to the AAC and a Committee Member of LAC, and an active athletics judge, he was in an ideal position to compile the results for the year.

He was also a member of the Royal Toxophilite Society. His main sport, however, was cricket.  He was a steady opening right-hand or middle-order batsman, and a right-hand slow round-arm bowler; and he fielded at third man most effectively.  He played 61 First-Class matches, 19 matches for Middlesex, 5 for Yorkshire, and also played for the MCC, Surrey, the Gentlemen of the South, the Anomolies Cricket Club, and others.

In 1874 he took the chair at the meeting when the Durham County Cricket Club was formed.

The place of Wilkinson’s “The Athlete for 1869”, in the history of Athletics literature:

This is a compilation of the amateur athletic results in Britain for the year 1868.  It is, therefore, the third consecutive annual review by the Amateur Athletic Club of all (or of as many as were available) the results of athletics meetings held in Britain; it is a unique record, and there would be no more.  Significantly, there is no request for secretaries to submit results for the following year.  Perhaps the task was too onerous for anyone to take it on.

In this volume we also learn just how ambitious the Amateur Athletic Club was under their President the Earl of Jersey (Victor Child Villiers, 7th Earl of Jersey).  In March 1868 (and again in November) they promoted a Billiards Handicap Meeting, and in April they promoted Championship Boxing for the Marquis of Queensberry cups (the Marquis of Queensberry was a member of the AAC Committee); they did, however, discontinue promoting the Professional Handicaps for the non-amateur runners.

The volume is dedicated to the Amateur Athletic Club, and begins with a description of their “New Running Grounds, adjoining the West Brompton Railway Station”.  This was both a new development and an old one.  The AAC had held their Championship Meeting there ever since it began in 1866, but in 1866 they used it “by permission of Lord Ranelagh” and “in the Grounds of Beaufort House”; now it was their own ground.  It was an ambitious venture by the AAC, but not driven my blind optimism alone.  New tube-links would make it more accessible, and the site more useful and valuable.  The notice on p. iv (but un-numbered) states that “in a few weeks … trains will be running”, and this referred to the District Railway (now the District Line), which opened a station alongside the West London Extension Joint Railway (WLEJR), which itself had opened a few years earlier, and there was a plan to join the District Railway to the WLEJR.  The District railway at West Brompton was scheduled to open 12 April 1869.  The railways were important to the development of sport in Britain, but the growing tube (underground) network was also important in London.  The whole of the item (p. iv, un-numbered) is about the grounds accessibility by tube, rail and bus.

Next, the “Competition Rules of the Amateur Athletics Club” are given, previously called the “Laws of Athletics”.  Was this an acknowledgement of the limit to which they could impose their “Laws”?  They, are, nevertheless, unchanged from the previous year.  The old Definition of an Amateur is significantly changed, however; now it is described as the Definition of a Gentleman Amateur.  The text of the definition has now reverted to the wording published two years earlier; the changes of the previous year having been now rejected.  This is a clear indication of disagreements behind the scenes in the AAC about what an amateur was.  The name “gentleman amateur” is singularly revealing.  Attitudes in the AAC were hardening towards those non-gentlemen who ran for money.  They had discontinued their promotion of the Professional Handicaps, and now they would not print even the results of a professional competition, no matter how minor.  On p. 39 they print the results of the Canterbury Rural Fete, held on 2 June 1868 – this is what they say about it –

"This was a mixed Meeting, partly for amateurs and partly for professionals, or rather, with some races for money prizes.  We only report the amateur races."

As in the previous volume, matters become slightly confused by the inclusion of some results from other years – e.g. results for 1867, p. 102.  Odd events appear from time to time, such as the Trousers Match at Worcester College, and the Blindfold Race at the Hon Artillery Company Sports.  Perhaps the Kinging the Football event and the Football Race at the Sheffield Football Club Sports had something to do with the place of football in Sheffield, but the City of London School also held a King the Football competition, and even had two divisions for it – First Class and Second Class.  Under the umbrella of athletics, a lot of people seem to have had a lot of fun in Britain in 1868 –so long as they did not win money at it.