A website dedicated to athletics literature / The Athlete for 1868 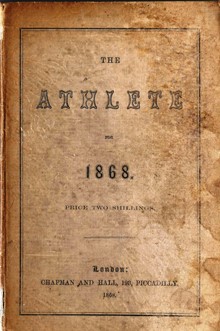 He was born in 1835 in Co Durham, and went to Shrewsbury School and St John’s College, Cambridge.  He was a member of the Amateur Athletic Club, and in May 1868 became its Secretary.  He was also an elected member of the London Athletic Club committee (other committee members included E.J. Colbeck, W. Rye, and W.G. Grace.  Secretary was Walter Chinnery).  During 1868 he acted as a judge at LAC’s meetings, and in 1869 at the Cambridge University Sports, and at many others.  Wilkinson was a sprinter who ran races from 100yds to 440yds in 1866 and 1867, without any particular success, but, as Secretary to the AAC and a Committee Member of LAC, and as an active athletics judge, he was in an ideal position to compile the results for the year.

He was also a member of the Royal Toxophilite Society.  His main sport, however, was cricket.  He was a steady opening right-hand or middle-order batsman, and a right-hand slow round-arm bowler; and he fielded at third man most effectively.  He played 61 First-Class matches: 19 for Middlesex, 5 for Yorkshire, and he also played for the MCC, Surrey, the Gentlemen of the South, the Anomolies Cricket Club, and others.

In 1874 he took the chair at the meeting when the Durham County Cricket Club was formed.

The place of Wilkinson’s “The Athlete for 1868”, in the history of Athletics literature:

Walter Pilkington had compiled the athletics results for the 1866 season for the Amateur Athletic Club (see Athlos books), and there seemed to be no equivalent compilation for the season 1867; nevertheless, this volume entitled The Athlete for 1868, actually gives the results for 1867.  Thus, it enables us to compare the 1866 and 1867 seasons directly, and to see how the sport developed in these early years of the amateur sport. These were days when a live-and-let-live attitude prevailed, at least among some people in the new sport of amateur athletics; the Amateur Athletic Club promoted a Professional Handicap Meeting at Beaufort House on Saturday 13 April, and the 2nd AAC Champion Meeting for amateurs on Monday 15 April.

The book starts with an invitation to Club Secretaries to submit results to A.J. Wilkinson for next year’s volume.  This is followed by the “Laws of Athletics” which has amendments to the 1866 Laws 9 and 13.  The “Definition of an Amateur” is also slightly varied from the 1866 Law, with the words “or is a mechanic, artisan, or labourer” added, reflecting the desire among some to tighten up the definition to exclude some who might not be gentlemen.