A website dedicated to athletics literature / The Athlete for 1866 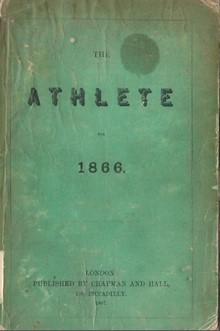 Walter Pilkington was not listed as the author but the initials W.P. are given at the end of the Preface. He is clearly a member of the Amateur Athletic Club and the members are all listed; there is only one (Walter Pilkington) with those initials.

Walter Pilkington and John Graham Chambers were both members of the Amateur Athletic Club and Chambers was also a member of the Cambridge University Boat Club and competed in the Oxford v Cambridge Boat Race in 1862 and 1863, but on both occasions in the losing boat. Chambers was the starter at the Championship Meeting in March 1866.

The place of Pilkington’s “The Athlete for 1866”, in the history of Athletics literature:

There can be few years in the history of the sport of Track and Field Athletics more important than 1866.   This was the year of the first Championship Meeting, which was the stimulus for the first definition of an amateur, and the first written ‘Laws of Athletics’.  This volume contains results of 90 athletics meetings (of various kinds) that took place in the course of the year, and so is the most complete picture of the sport up to that time.  46 were based on universities and colleges, 14 on schools, 5 on cricket clubs, and 4 on rowing clubs.  Only 5 seem to have been based on recognised athletics clubs, but several seem to have been the sports of a town or community, and these may have been based on a local athletics group.  Hundreds of names of athletes, officials and administrators are given, and among these we can trace some men who, in the years ahead, were to become important figures in the Amateur Athletic Association (e.g., Walter Chinnery, Guy Pym, CW Jackson); and some were the names of athletes from the professional past (e.g., Charles Westhall).  This volume shows a very wide range of athletic events employed at these meetings, many of which have since been discarded, but the first “Champion Meeting”, organised by the Amateur Athletic Club in March at Walham Green (later, re-named Fulham Broadway, West London), laid down the basic shape of an athletics meeting which the sport follows to this day: sprints, middle distances, hurdles, walks, jumps, pole vault, and throwing events.  The Laws also form the basis on which all later laws were built. There were, for example, to be 10 hurdles of 3ft 6inches, the shot and hammers were to be 16lbs, and three attempts were to be allowed at each height in the vertical jumps, etc.  The Amateur Athletic Club had 339 members, all of whom are listed.

A table of Contents lists the following - a Preface by Walter Pilkington, an Index to Reports, The Report of Athletic Meetings (by far the largest section), The Rules of Athletics (called “Laws” in the text), and Hints on Training by JG Chambers (actually called Training, Its Objects, Advantages and Abuses), in the text.

In his Preface, Pilkington describes how he embarked on what he believed would become ‘a Standard Work of reference’ for the sport, but, that this, the first year, presented ‘great difficulties’.  Nevertheless, he manages to compile a very comprehensive set of results of 90 athletics “meetings” of various kinds, often with the results of heats as well as finals, the names and affiliations of all athletes, often with a brief comment (e.g. “Thornton led all the way and won by ten yards”, “Wilson had the race in hand over the last flight, but fell during the run in.”).  Venues are also given, and also the names of the officials, and sometimes the names of the committee that organised it.

Although not listed in the Contents, there is a very useful section on The Amateur Athletic Club, its formation, and its raison d’être – “to supply a want which existed of some established Ground on which competitions in Amateur Athletic Sports might take place, and to afford as completely as possible to all classes of Gentleman Amateurs the means of practising and competing against one another without being compelled to mix with professional runners.”  They held the first Championship Meeting in March, and a Handicap Meeting in December, so were the spring from which all Championship athletics, and handicap meetings, sprang.  They already had a Gymnasium in Wellington Street (near Covent Garden, in London), and “in a few weeks” would have their own “Running ground”.  They were also making arrangements for Club Rooms in St James’s.  It was an ambitious undertaking and their wish was that the AAC would achieve the same standing in Athletics that the MCC did in cricket.

The results section is the main part of the book, and its great detail allows us to trace the season of many athletes, including some whose reputations were made in other sports.  For example, it shows us that WG Grace (who had reached his 18th birthday in July) competed in the Bristol and West of England Athletic Sports, at the Zoological gardens, Clifton, on 25 August.  He won the 100yds by 3yds in 11seconds, won Throwing the Cricket Ball with 107yds, won the 300yds Hurdles (10 flights) by 30yds in 45 seconds, won the 440yds in 59 seconds, and was 2nd in the Pole Vault with 8ft 7ins, one inch behind the winner.  If this is not impressive enough, 48 hours later he had travelled to The Oval in South London to compete for the Gentlemen of the South against the Players of the south, and overwhelmed them with both bat and ball.  He took 7 for 92 in the 1st innings; scored 173 not out in the Gentleman’s reply, and then took 2 for 16 in the Players’ short second innings (they were 52 for 4) when the match was drawn.  Details of WG Grace’s performances in six other Athletics meetings that year are also given.

The 16 Laws of Athletics are augmented by the Definition of an Amateur.

The chapter on Training was contributed by J.G Chambers (Cambridge University Boat Club), and is divided into short sections – Self-Training, The Body in its Relation to Vital Powers, High Jumping, Broad jumping, Hammer Throwing, Putting the Weight, Sprint Running, Hurdle Racing, Quarter and half Mile Distances, One Mile Running and Upwards, Walking, The Principal Muscles Used by the Athlete, Temperament, Exercise, Growth and Decay, Timing Men, and Hints in, Before, and After the Race.

Chambers also includes the best times over a wide range of distances by amateurs and professionals, for walking and running, which demonstrated the superiority of the professionals; but notes that that some professional walking times would have been disqualified had a firm umpire been present. He also commented that the ambitions of the amateur walkers were not up to the challenge of the long distances, resulting in markedly inferior performances by them.

Not listed but Chambers' "Hints on Training, 1868?", is given as E182. No publication details are given.