Running Recollections and How to Train 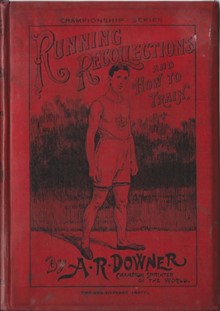 The importance of Downer’s “Running Recollections and How to Train”, in the history of Athletics literature.

This gives an insider’s account of the world of the sprinter in the last decade of the 19th century.  He tells of the tension between the professionals and amateurs, and of the zeal of the amateur officials in policing their sport.  For those who wish to understand the difference between the life, competition and training of an amateur and professional sprinter of this era, there is no better source than this.  It is full of detail, and one of its great values is that it was written by a competing athlete: if, however, any part, or all of the book was ghosted, there is no record of who might have been responsible, but the ‘originator’ of the volume (the man behind the book’s publication, and who probably sponsored it) was J. Rickerby.  Whatever its background and internal history, this book reads and ‘feels’ like the authentic voice of an athlete.

The autobiographical part of the book consists of 81 pages in twenty-two brief chapters.  The detail and statistical records are extremely valuable, and he lists all 119 of his competitions as an amateur (from 1885 to June 1896) with the results.  He also gives an historical account of training which shows how some of the training ideas still in use could be traced back to Sir John Sinclair nearly a hundred years earlier.  In the chapters on professional running he describes individual matches and how the heat system worked and how they made their money – a most precarious business.

He also has a chapter on Training Advice to Young Runners, including weight-training and work with the punch-ball; and another, briefer, chapter on his own training.

There are also sections by -

‘Cantab’ (Training for Boys – all events)

The book has 20 photographic illustrations.  Most are portraits, but there are photographs of Downer’s and Harry Hutchens’s starting positions.  There is also one action photograph of Downer ‘beating even time’, showing excellent sprinting action – good leg-extension behind the body, high knee-lift, and good arm action, with relaxed hands.

Running Recollections and How to Train