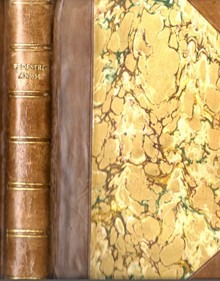 The Author of the History of Aberdeen, &c., &c., &c. [Walter Thom], “Pedestrianism; or, an Account of The Performances of Celebrated Pedestrians During The Last and Present Century: With a Full Narrative of Captain Barclay’s Public and Private Matches; and an Essay on Training”, 1813.

Although credit for being the author of Pedestrianism, was given only to The Author of the History of Aberdeen, &c., &c., &c., it was fairly simple to work out that his name was Walter Thom, who was a writer and bookseller in Aberdeen, and who had been born in Bervie, Kincardineshire, very near to Captain Barclay’s home.  In addition to his History of Aberdeen (1811), Thom also contributed to Sir John Sinclair’s Statistical Account of Scotland, and to the Edinburgh Encyclopædia, edited by David Brewster.   He had no particular knowledge of sport, and after the commercial failure of Pedestrianism he moved to Ireland where he became the editor of The Dublin Journal.

The place of Thom’s “Pedestrianism” in the history of Athletics literature:

Written as a direct response to pierce Egan’s Boxiana (1812), Pedestrianism failed to match the huge popular success of Boxiana and was never reprinted or re-issued.  Nevertheless, it has an important place in the history of Athletics literature, primarily because of the attention it gives to Captain Barclay’s life and athletic achievements, and the opportunity it gave in the chapter On Training for Captain Barclay to give details of his training methods.  Pedestrianism also gives a review of ‘modern pedestrianism’ and provides a table of significant performances over distances from 100 yards to 700 miles, and from 1762 to 1811.

Pedestrianism has seven chapters, plus an appendix on the genealogy of the Barclay family.  Chapter I, On the Gymnastic Exercises of the Ancients, acknowledges the importance of Ancient Greece in the development of sport in Britain, and shows a considerable knowledge of the ancient Games, using the words Olympic, Olympia or Olympiad no fewer than 23 times in 13 pages.  One of his key points was that by 1813 pedestrianism in Britain had reached a point of ‘great perfection’ and had exceeded the levels of performances achieved by the Ancient Greeks.  Chapters II and III, are a review of individual pedestrian performances, taken, largely from The Sporting Magazine which had begun publication in 1792, but which carried details of many historic performances.  The table of significant performances gives the date, athlete’s name, distance, and time, of 118 events.  Chapter IV gives a thorough review of 26 of Captain Barclay’s performances, and most importantly, the hour-by-hour Journal of Captain Barclay’s One Thousand Miles, in One Thousand Successive Hours.  It is the only known copy of this journal.  Chapter V (erroneously given as VI in the text) gives details on Captain Barclay’s favourite pursuits, and Chapter VI, On Training, was written by Captain Barclay, and sets out to tell the story of training from the time of the Ancient Greeks to the ‘modern’ world of training.  The ideas put forward in Sir John Sinclair’s Collection of Papers on the Subject of Athletic Exercises were the most up to date, and Barclay relies heavily on Sinclair’s work.  Chapter VI, On the Physical Powers of Man, is a short comparison of the physical powers of horses and men, and of Regnier’s dynamometer and the comparative strength of various people around the world.  Man, he concludes, benefits enormously from regular, vigorous exercise, performed over long periods of time.  Indeed, modern man does not realise just how strong he is.

Of its 286 pages, nearly two-thirds were either written by Captain Barclay or were about him and his family.

Pedestrianism; or, an Account of The Performances of Celebrated Pedestrians During The Last and Present Century: With a Full Narrative of Captain Barclay’s Public and Private Matches; and an Essay on Training.