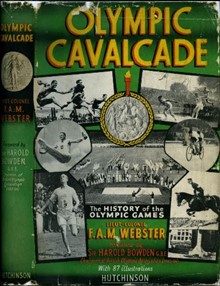 The place of Webster’s “OLYMPIC CAVALCADE” in the history of Athletics literature:

F.A.M. Webster loved the Olympic Games, their history, their personalities, even the very idea of them, so their return in 1948 after the loss of two Games that would have marked the 1940 and 1944 Olympiads, was a cause of great celebration for him; and how better to celebrate their return than to publish a book to prepare the British people for them.  The 1948 Olympic Games were held in London from 29 July to 14 August, and this book got its first review at the end of May 1948

It is a book full of enthusiasm, and of detailed fact.  It reveals Webster’s affection for the Olympic Games and he gives an account of the origin of the Modern Games, giving pride of place to Pierre de Coubertin, and a genial portrait of him faces the title page.  Webster gives an account of the events and politics leading up to 1896, and provides a history of every Games thereafter (up to and including 1936).  The book has a clear British bias, though to modern eyes he rather underplays the debt that de Coubertin owed to British sporting traditions and ideas. The space that Webster allots to each Games steadily increases as the years go by, and he even allocates eight pages to the Games that did not take place in 1916 - indeed, it is one of the most fascinating sections of the book.  The reader can feel his sense of loss that the 1916 Olympic Games did not take place, and some of the detail he gives of the events that surround the 1916 non-Games are difficult to find anywhere else; and are still a go-to source for those wishing to understand this period of British sport. His comments on Sam Mussabini in this section (pp. 103-4) are a wonderful tribute, and still the best to be found.  (See also in the Athlos collection - “The Olympic Games and the Duke of Westminster's Appeal for £100,000: A historical survey of the movement for better organisation in the British preparations for the Berlin Games of 1916,” published 1913).

Webster had already attended and reported on six Olympic Games, 1912, 1920, 1924, 1928, 1932, and 1936, and so his writing has additional power - he was there.  In the Foreword, Sir Harold Bowden praises Webster’s encyclopaedic, practical and wide knowledge of the Games, and concludes by writing -

Any reader who can digest the information contained in this all-embracing compendium will close the final pages with a knowledge of athletic history and records which may well be an inspiration to the younger generation.

The Olympic Games of the 21st century are, perhaps, known to everyone, with their vast budgets, celebrity athletes with their teams of advisors, saturation media coverage around the clock and around the globe, and their focus on the Medal Table.  All who know this, know also of the barely concealed cynicism that accompanies them - suspicions about the bidding process, the historic greed of the IOC, the self-interest of the Major Sponsors, the doubt about the success of the anti-doping programme internationally.  Can any athlete's performance now be unquestioningly believed? The switching of nationality of athletes from poorer countries to the highest bidder, and so on.  This creates a mood that is the back-drop to writing about the Olympic Games in the 21st century; the mood was different in 1948.  The world then was recovering from the horrors of World War II.  Fresh in everyone’s mind was the loss of life on a terrifying scale, cities had been destroyed, and so had economies, national borders had changed, and there were major winners and losers, but even the winners had lost more than anyone wished to contemplate.

The 1948 Olympic Games assumed a major world significance; not only as a signal that, perhaps, the world could pick up the pieces and find some sort of normality again, but also as a symbol of hope.  Nations getting together in peace and for sport had a meaning in 1948 that 21st century generations will find hard to understand.  The hope was deep and urgent.  The generation that organised the 1948 Olympic Games (those in their 40s, let’s say) had not only lived through and survived a long and ghastly war that had robbed them of some of the best years of their life, but as children and teenagers had lived through the First World War too; in which millions died and barely a family was left unaffected.  Those in their 50s and 60s remembered both World Wars well.  Webster was 62 when he wrote Olympic Cavalcade.

In 1948 the world was war-weary and was suspicious about notions of winning and losing.  There was no sense of triumphalism in 1948.  What people wanted from sport, apart from hope, was the sense that there was something better than the merely winning and losing of contests; what mattered was the quality of the striving, and the quality of the people who did it.  It wasn’t idealism, they had all gone through too much for that but rather an urge to do something practical to secure the conditions in which peace would flourish for the next generation or more.  It produced a different sort of writing from that to which we have become accustomed in recent years, and Webster's writing style illustrates this difference.  This, of course, was also the Amateur Age, so no competitor in 1948 ever asked what was in it for them, or contemplated financial gain, and certainly not riches!

In creating a summary of the Olympic Games since 1896, any writer has to be selective, and what a writer chooses to focus on is illuminating in ways the writer never expected.  Here are a few of FAM Webster’s chosen topics.  When writing about the Ancient Olympic Games he finds time to comment that, “when cash enters into sport, corruption is bound to follow,” and, “the real prize was then, and still is, the honour of victory.”  Writing of the period between the Ancient and the Modern Olympic Games, he discusses the role of the Irish Tailtin Games, the Scots, and the Anglo-Saxon tradition.  Under the heading of the 1896 Games he mentions Charlie Perry, the former LAC groundsman who oversaw the remodelling of the 4th century BC Panathenaic Stadium, but focuses on the figure of Pierre de Coubertin, to Webster a man of heroic stature, and quotes him saying, “The real free trade of the future will be to send our athletes of all kinds to all countries where games are played . . . On the day that this free trade is accepted in Europe, a great step forward will have been made in the sacred cause of peace.”  He quotes this twice in the book.  These themes of internationalism, amateurism and peace were in the very air that Webster and others breathed in 1948.  In the spirit of hope, these, too, were the Games above all others before, that fathers took their children to - I have given up counting how many people in later life have told me that they were taken as children to the 1948 Olympic Games.

In his section entitled “The First Hiatus”, he discusses the events leading up to the 1916 Games (which, of course, did not take place) and the fierce debate in Britain about how its Olympic team should be financed, and coached.  The perception after the 1912 Olympic Games was that, in comparison with the USA, British athletics was amateurish and backward looking, and that the ethos of the gentleman-amateur was holding British sport back.  But in February 1914, the British Olympic Council took a bold step and appointed Walter Knox, a Scottish-Canadian, to take charge of the British team for the 1916 Berlin Olympic Games, having previously offered the post to Tom Keane, an Irish-American, who turned it down.  Walter Knox was a professional, as was Tom Keane, so the decision to turn away from the gentleman-amateur to the professional had been made. But World War I intervened and in October 1914 Walter Knox went home to Canada, and the 1916 Games were cancelled.

In 1920, however, Walter Knox appeared at the Antwerp Olympic Games as the Head Coach for Canada, and the British had slipped back into their gentleman-amateur ways.  Webster summarises his views on this slippage as follows (p. 104) -

“As was the case with Lawson Robertson (U.S.A.), Hjertberg (Sweden) and Boyd Comstock, the American who had coached
Italy for the 1936 Games, each country should appoint its own professional coach. He should be given entire charge of the
teaching and training of his team and should advise fully on the selection of its members.

There is neither time nor scope in my philosophy for the unpaid amateurs who still act as team managers interfering in the
management or the training or the final selection of a nation’s Olympic team.”

It would be many, many years before the unpaid amateurs in British athletics relinquished their role and ceased to interfere in management, training and selection, and F.A.M. Webster would not live to see it.  He died in 1949 but, in this regard, his “philosophy” was many years ahead of its time.

There are 86 photographic illustrations in Olympic Cavalcade, about a quarter of which are portraits, team photographs and images of official occasions, and royalty.  Of the rest, nearly three-quarters are action pictures of athletics events, with the other sports getting a single token picture, at best.  This reflects the focus of the book as a whole which was written by someone who believed that athletics (i.e. Track and Field) was the heart and soul of the Olympic Games.  He does not ignore the other sports, but anyone reading this book looking for a balanced account across all the sports will be disappointed.  This is a book about athletics at the Olympic Games, with some additions.

Apart from his accounts of the key events, athletes and coaches in each of the Olympic Games of the Modern Era (1896-1936), he gives a list of all the winners at the end of each chapter.


Published at 21/- (21 shillings) in “racing-green boards”, it must have had quite a large print-run, for it is quite easy to find on the second-hand book market, and is still available quite cheaply.  Its original value would be equivalent in purchasing power in 2015 to £34. 43; so, not a cheap book by 1948, post-war, standards.  It is not usual to find it with its dust-jacket however.