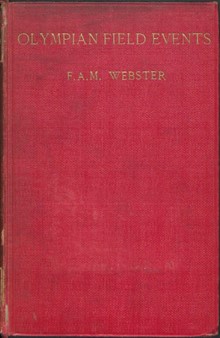 The place of Webster's "Olympian Field Events" in the history of Athletics literature:

The fact that this is the first book by a prolific author might make it important in itself, or because it had an introduction by a celebrity author (Conan Doyle was in his 60s and his creation of Sherlock Holmes had made him one of the best known and best paid writers of his age).  But the real significance of this book lies in its context.  The poor results by British field events athletes in the 1912 Olympic Games came as a shock and were seen as something of a national disgrace.  In the 12 track events (running, walking, hurdling), Britain won 3 Golds, 6 Medals, and had 8 placings in the first Six.  In the 8 field events, Britain won no Golds, no Medals, and was placed only once in the first six.

But this wasn't a shock to everyone; F.A.M. Webster saw it coming.  In May 1910, when he was still only 23 years of age, Webster had helped set up the British Amateur Field Events Association (BAFEA), and was its Hon. Secretary and toured the country holding meetings to promote it.  It was set up, said Webster, because British field-event athletes had fallen "behind the Americans and the representatives of other countries". Already Arthur Conan Doyle was the BAFEA's Chairman; soon, however, it became known simply as the Amateur Field Events Association (AFEA).

The results of the 1912 Olympic Games show us that, in its first few years, the AFEA had made little or no impact on the standard of Field Events in Britain.  After 1912 the public mood changed, led in part by a letter to The Times in which Conan Doyle made the case for better organised and better funded British Olympic teams, and began a process to procure a new approach in time for the 1916 Olympic Games, (see, http://www.athlos.co.uk/books/theolympicgamesandthedukeofwestminstersappeal.htm)

"Olympian Field Events; Their History and Practice" was part of the public campaign by Webster and Conan Doyle to change British attitudes to athletics’ field-events.  Part of that process was to gain maximum publicity for them (and the AFEA) and, with Conan Doyle's help, the book was extensively reviewed; and there was one outstanding PR coup - Webster presented a copy to the King (George V).

The King, who is keenly interested in the movement now on foot to re-establish British supremacy in the field of sport,
has graciously accepted a copy of “Olympian Field Events; Their History and Practice" (Newnes, 2s 6d net) from its
author, Mr. F.A.M. Webster, L.A.C., and hon. secretary of the Amateur Field Events Association.  Mr. Webster's book
is the most comprehensive volume of the kind ever published.

A vigorous "Introduction" by Sir Arthur Conan Doyle throws a clear light upon the present position of English athletics,
which the genial novelist pronounces to be critical, and he expresses the hope that Mr. Webster's book will help draw
out the undiscovered talent in our midst.

This was not just a book, it was part of a campaign, and the campaign went on.  Almost at once work began on a follow up and, in May 1914, Webster published "The Evolution of the Olympic Games, 1829BC to 1914 AD", with a Preface by Sir Arthur Conan Doyle, and the introductory chapter provided by the Duke of Somerset (Evelyn Francis Edward Seymour, 17th Duke of Somerset), who was Chairman of the British Olympic Council.

Webster and Conan Doyle, however, were not the only activists.  In January 1914 the Olympic Sub-Committee of the Amateur Athletic Association and members of the Athletes' Advisory Club met to discuss how best they could co-operate to provide coaching for British athletes.  They agreed to appoint professional coaches as far as their funding would allow, and they went on to appoint coaches for every event.  In February, the British Olympic Council appointed Walter Knox, the Canadian, All-Round Professional Champion, to take charge of the British team for the 1916 Berlin Olympic Games.

In the early summer of 1914, the coaching of British athletes seemed to be on the brink of a new era, but the world took a different turn on 28th June, when Archduke Franz Ferdinand was assassinated at Sarajevo.  Walter Knox's employment was terminated and athletes and coaches, and virtually all able-bodied men, went to war.  There would be no Olympic Games in 1916.

This is the first of Webster's books that would eventually lead to well over 100 more, stretching over the next 37 years.  Several characteristics are immediately apparent - the authors enthusiasm for his subject, the high level of technical detail he employs, his historical perspective, and the importance of illustrations.

This was not just Webster's first book, it is probably the first book ever written that focussed on field-events; and it also had a "celebrity" introduction.  But there was more to it than that.

Several of his contemporaries claimed to be "scientific" in their approach to writing about or coaching athletics; J.W. Sutherland (1912) claimed that his methods were "scientific" but did not get much further than quoting others whom he believed were scientific; Murphy (1914) was often described as employing scientific methods as a coach, but his books reveal very little that we would recognise today as "scientific".  We have no difficulty, however, in recognising the careful analysis and scientific approach behind Webster's writing.

The illustrations are a particular feature; there are twenty-two of them and include some images that cannot be found anywhere else.  All the events are illustrated, and Webster's search for appropriate illustrations must have taken him almost as much time as writing the text!

Webster includes all the Olympic field-events of 1912 (the Standing Long Jump,  Standing High Jump, and Tug-of War were still Olympic events in 1912) but he also includes Slinging the 56lb Weight which was a Scottish Highland event and not on the Olympic programme in 1912 or 1908.  Interestingly, he includes the Hurdles as field events, including the Low Hurdles which was never an Olympic event, nor ever would be.

After the Preface and Introduction, the book is in three sections - Throwing, Jumping and Hurdles (plus Tug-of War).