A website dedicated to athletics literature / Men of Muscle, and the Highland Games of Scotland, etc.

Men of Muscle, and the Highland Games of Scotland, etc. 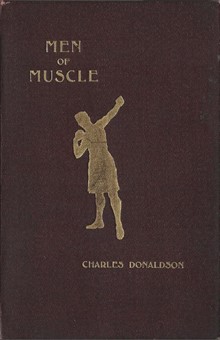 Charles Arthur Donaldson, Men of Muscle, and the Highland Games of Scotland, with Brief Biographies of the Leading Athletes of the Last Fifty Years, 1901

Charles Donaldson was born in Lerwick in the Shetlands, but left as a young man and went to live in Glasgow where he embarked on a career as a travelling wrestler, exhibiting in halls and theatres around Britain in a mixture of show-business, circus, and sport.  Between 1893 and 1895 there are reports of him wrestling at Kirkwall, Liverpool, Dundee, Glasgow and at the Alhambra Theatre of Varieties in Leicester Square, London, where he joined a Grand Wrestling Tournament that began every evening at 10.30; following A Day Out which had begun at 8.00, and Ali Baba, which began at 8.55.  The tournament included George Steadman, Charles Green, Tom Cannon, the ‘Imperial Turkish Wrestlers’ (Memisch, Mehmet, and Ismail), Joe Carrol (Ireland), G.M. Ross (America), Leon Masson (Paris), Paul Belling (Germany), Trillat le Savoyard (France), Nicola Petroff (Bulgaria), and Antonio Pierri - the Terrible Greek.

Charles Donaldson, however, was a relatively small man, standing 5ft 8inches (1.73m), and weighing 11st 6lbs.  (160lbs/72.6kg); all the others were much bigger men.  For example, Tom Cannon fluctuated between 15½ and 17 stone (217lbs/98.4kg, and 238lbs/107.9kg) and George Steadman was 18½ stone (259lbs/117.5kg).  He had been hired as a novelty to join the show after it had been running at the Alhambra for several weeks, in the hope that his speed and agility would be a draw.  It was not, however, a success - he was the last to join the troupe and the first to leave.  He had lifted weights and done all he could to develop his physique and put on muscle, but he had to recognise that skilful and quick as he might be, he would never compete against the men of muscle - a good big ’un always beats a good little ’un.

The following year (1896), back in Glasgow, having learned that he needed other means to keep his family, he was granted a licence to run The American Bar on Ardgowan Street, on the South-Side of Glasgow.  Charles Donaldson didn’t give up wrestling altogether though; he was still drawn to the wrestler’s world and he would remain fascinated by the big, strong men all his life.  In 1897, he wrestled Gideon Perrie of Canada at the Wellington Palace on Commercial Road, Glasgow, for the so-called catch-as-catch-can championship of Scotland, and £50.  Perrie was said to have weighed over 200lbs (14st 4lbs/90.7kg) and was described as “an enormously big fellow”, and he won easily taking only a little over 3 and 5 minutes to secure two falls.  Much as he wanted to be part of their world, Charles Donaldson had to acknowledge that he could not match the big, strong men he admired, and he finally retired from competition - he was thirty-one, and turned his attention to officiating and administrative roles.

In August 1898, he judged the wrestling at the Partick Police Sports, and in 1899 he was stake-holder and referee for a match at Motherwell Town Hall.  A few months later he was referee at the “programme of Highland games and sports” that marked the opening of the Kilmarnock Agricultural Show and Recreation Grounds; Athlos readers might also be interested to know that William McCombie Smith, author of The Athletes and Athletic Sports of Scotland, was the piping and dancing judge.

It was shortly after this that Charles Donaldson began his series of articles for the Glasgow Evening Times on the big Scottish throwers and lifters who had competed in the various Highland Games in Scotland over the previous fifty years; which he later re-published as Men of Muscle - and The Highland Games of Scotland.  Some of the competitors he reported on were also wrestlers that Donaldson knew well, either from competing against them or by being on the same bill with them, but there is no evidence that Charles Donaldson ever took part in any Highland Games.

After his publication of Men of Muscle, Charles Donaldson continued his association with wrestling, and continued as licensee of the American Bar.  He took entries for wrestling competitions, and also became involved in the boxing world, and acted as witness to the signing of Articles of Agreement for boxing matches, and acted as stake-holder.  He also developed an old interest and became a photographer.

He also became landlord ofThe New Coffin Bar at88, Whitevale St, in the Dennistoun district of Glasgow which, though small, became a shrine for boxers; Jack Johnson visited him there in 1915, wearing £20,000 of diamonds.  In the 1920s the area around the New Coffin bar was becoming run-down and in 1926 Charles Donaldson applied for a license to sell wines and spirits in another part of Glasgow; but his application was turned down and so, to earn a living, he turned to boxing journalism and became boxing editor of the Glasgow Evening Times.

The following year (1828) Charles Donaldson ventured into publishing again, this time writing a boxing history, From Figg to Tunney, published by Kirkwood & Co., but it was a very small print run, and it was poorly received, rarely, if at all, reviewed, and is now almost impossible to find.

A fuller description of James Morrison, Partick Police, can be found here

The place of Donaldson’s “
Men of Muscle, and the Highland Games of Scotland, with Brief Biographies of the Leading Athletes of the Last Fifty Years”, in the history of Athletics literature:

It is an invaluable source of information gathered from the “several secretaries of Highland Games” whom he had approached for information, and from the “many gentlemen in different parts of Scotland who have come voluntarily forward with facts”, but, valuable as it is, Charles Donaldson had never had any direct involvement with the Highland Games apart from knowing some of the athletes who were also wrestlers, and the policeman-athletes he knew from officiating at their sports.  Men of Muscle is something of a hodgepodge, with Donaldson bringing together history and biography of Highland Games athletes, but also including a biography of Tom Cannon who never appeared in any Highland Games, and also an instructional chapter on weight-lifting that he acknowledges was “foreign to the Highland Games”.

Photographs are an important part of the book, seven of which Donaldson took himself.  There are 34 photographs in all, mostly portraits, and in many cases they are the only images that have survived of these athletes, and some date from the earliest days of photography.  Donaldson says that the photograph of William Stewart was taken “fifty years ago”, i.e. 1851, which makes it one of the earliest photographs of an athlete.  There is also an advertisement for a photographic studio in Glasgow that had special terms for “professionals and athletes”.

The book is full of Donaldson’s personal admiration for these big, strong men, but a strange mood of nostalgic romanticism runs through it, a mood almost of longing, perhaps an expression of Donaldson’s thwarted desire to be one of the athletes he writes about.  He was an outsider who had wanted to be an insider, and there is an almost palpable sense of loss running through the book.  Men of Muscle is an important book because of the details found in it, such as the details of every throw in every round of a hammer throwing competition at Luss in 1896, this is very rare, and because of the detailed description of the men that Donaldson knew, their looks, and even their personalities and their outlook on life.  The gaps in the book can almost be forgiven, but the absence of dates is often frustrating, as are the omissions that Donaldson hoped to get around to in the second volume that never appeared.

Unlike McCombie Smith, he makes no attempt to evaluate the performances of the athletes whom he describes, all of whom are throwers.  It is clear that, as in the first years of the 20th century, Scotland was replete with agriculturally-strong athletes, capable on their day of putting the 16lb. shot over 14metres (46ft), and skilled in a wide range of non-standard throwing events.  This is a rich, detailed account of these fine, self-taught men, many of whom, alas, were destined to fall a few years later in the Great War.

In describing these athletes at this peak period of the Highland Games, Donaldson was unwittingly writing the epitaph for a rich, rurally-based, field events culture.  For the Highland and Border Games were to fade fast in the period following the War, though the former were more resilient, and made a partial recovery.  The author [TM] nevertheless well remembers competing in a Border Games as late as 1950.  It was like stepping back in time.  For there were no sandpits for the horizontal jumps, no take-off boards, simply a grizzled judge holding a measuring-tape.  It was exactly the same for the vertical jumps.

Without Men of Muscle, we would know very little about such great all-round throwers as A.A. Cameron and the Irishman Owen Duffy, both men capable of throwing close to 15metres with the 16lb. shot.  Cameron was also the best Scottish hammer-thrower of his period and could clear 1.55m (5ft 1in) in the standing high jump. And we get a brief, tantalising glimpse of the tiny Scots-Canadian J.J. McPherson, who thrashed Scots “heavies” in shot put during his Scottish tours, and who, like Cameron, cleared 1.55m in standing high jump.

Donaldson attempts to review the period from the second quarter of the 19th century to the beginning of the 20th century.  Alas, he suffers from lack of hard statistical evidence of the early 19th century, differences in the quality of implements in the hammer-events and in the weights of shots. And this is not to mention the perennial issue of throwing-gradients.  What does again emerge is the position of Donald Dinnie as the greatest all-round athlete of the 19th century.

What later proved to be remarkable was the resilience of the Highland Games, for, although many meetings vanished and few national records were created in the period between the Wars, the Games returned in profusion after the Second World War under the aegis of T. G. Young’s Scottish Games Association.  But what was even more remarkable was the growth of the Games outside Scotland, particularly in the USA, in that same post-war period.  There, they are now given credit for their influence upon the East Coast university programmes of the late 19th century.  But it is worth observing that the Highland Games now offer senior American throwers, both male and female, their only competitive opportunities, albeit mostly in non-standard events.  History has indeed turned full circle.

Men of Muscle, and the Highland Games of Scotland, with Brief Biographies of the Leading Athletes of the Last Fifty Years.