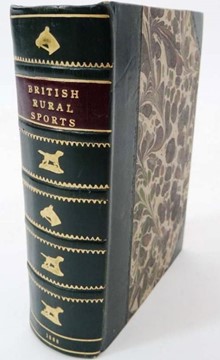 The author:  John Henry Walsh trained as a doctor and became a Fellow of the Royal College of Surgeons when in his mid 30s.  It was perhaps because of this that he began his writing career under the pseudonym Stonehenge, when he submitted a series of articles on greyhounds to Bell’s Life in London.  Bell’s Life had begun life in 1822 as a popular, weekly paper which contained ‘a rich repository of fashion, wit and humour and interesting incidents of real life.  It was published at 4pm on a Saturday afternoon so that it could be bought on a Sunday within 200 miles of London.  By the 1830s it specialised in sport of all kinds, and for any aspiring sports writer, was the paper to write for.  Walsh published his encyclopaedic British Rural Sports when in his mid 40s and it was an instant success.  Nothing previously had treated sport so thoroughly and with such respect, and it remained in print and in demand for as long as Walsh lived.  Shortly after the initial success of his British Rural Sports, Walsh became editor of The Field, and emerged as one of the leading sports journalists in Britain for over 30 years.

The place of Stonehenge’s “Manual of British Rural Sports” in the history of Athletics literature:

The section on Pedestrianism is significant because it is the first book to take into account the new, emerging amateur sport of athletics; it refers to the athletes at Oxford and Cambridge Universities, the training of ‘indolent, free-livers’ and ‘the over-studious man’.  Although looking forward to what would become Amateur Athletics, Walsh necessarily looks back to the old sport of pedestrianism and gives us insights into some of the old rules, some of which did not survive into the Amateur Age.  For example, he writes of the warning of a walker by a judge – ‘on being called to turn, the walker must turn completely round, and also alter his mode of walking, or he is again called upon to turn, and thus equally losing the match by the necessity for constant turning’ (p. 442-3).

This is by far the most detailed and informative account of pedestrianism so far, but its title may be confusing for the text does not confine itself to walking and running; it also includes sections on ‘hurdle racing’, and ‘leaping’ (standing, running, for width, for height, hop, step and jump, and pole leaping).  It also includes sections on ‘other sports at Athletics Meetings’ (throwing the hammer, and putting the weight).  Its section on training is also far advanced in comparison with anything that gone before, and includes a section on athletic injuries and how to avoid them, and failing that, how to treat them.

Under the overall heading of Pedestrianism and General Training of Man, the text comprises of three chapters –

Training for Pedestrian and Other Purposes.

The Treatment of Accidents Occurring in Training.

17 editions were published during Walsh's lifetime up to 1888.