A website dedicated to athletics literature / Coaching and Care of Athletes

Coaching and Care of Athletes 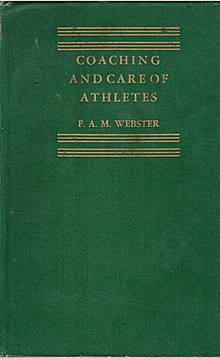 The place of Webster's “Coaching and Care of Athletes” in the history of Athletics literature:

If you were allowed just one of Webster’s 25 books on Athletics to represent the best of his work, it would be this one.  Not just because it is his biggest book, but because it seems to best capture his love of athletics, and in it we can sense his enthusiasm, and feel his determination to create a better system if coaching in Britain.  I never heard his voice in person but, because he writes at length here, I can almost believe that I can hear his voice as he explains in detail what he thinks I should know.  He writes with authority, and we are left in no doubt about what we should do, for Webster is very thorough and takes us through every event, its history and major personalities.  He explains the scientific foundation behind every theory, and even gets down to the fine detail of how to train, day by day, for every event.

Above all, however, Webster had a great gift for making us feel that we were there, even in coaching sessions.  This is true in his choice of photographs too, where we see groups of people at the Loughborough Summer School, learning and talking together.  In Figure 76, we see the runners in the 1937 AAA Championship 3-Mile event but, unusually, over the shoulders of two athletes in the middle who are urging the runners on, and only inches away from them.  It has an immediacy that we don’t get by looking at more formal pictures.  When Webster describes an event, he makes us feel the excitement of the moment.  Take, for example, his description of the final of the 440H in the1930 AAA Championship at Stamford Bridge.  In the home-straight the race was between Lord Burghley and Luigi Facelli, who had won the event the previous year; Lord Burghley had won it, the year before that -

. . . Facelli forged ahead and was still leading over the ninth fence.  The pace was terrific.  The vast crowd,
which had been roaring encouragement to Burghley, fell silent.  A national hero was facing defeat, and that
strange hush was one of sympathy not yet divorced from hope.
As he strode on towards the last fence the stout-hearted Italian seemed to falter.  Inch by inch the Englishman
crept up.  Facelli was rocking in his stride; Burghley, white as death, was at Facelli’s shoulder when, the last
flight cleared, the goal lay 40yds ahead.  Like flogged horses the men came up the straight.  Both were out
to the last ounce, but Burghley found an infinitesimal fragment of reserve energy from somewhere, and hurled
himself at the tape, to win by inches in English record time.


Completed just one year before the outbreak of WWII, this book gives us as full a picture of Athletics in the years before the war as we can ever hope to get.  It also gives us the best account of the conception, design and delivery of the annual Summer School at Loughborough College; an institution that had a profound impact on athletics coaching in Britain for the next two generations.

With 448 pages, this is a big book, but as Webster had no editor, and imposed no constraints on his number of words, he allows himself to go into detail, digress, give examples from his own experiences, and re-emphasise a point if he thought it was necessary, and so its length is a strength rather than a weakness.  Here, we feel that we get it all.

The book is divided into two parts - Theory and Practice, with Theory comprising 13 chapters, and Practice 16.  In Practice, each event gets its own chapter.  As with so many of Webster’s books, photographs are an important and significant feature.  There are 63 of them, plus 10 diagrams.  The photographs are not merely an add-on to help sell the book, but were very carefully selected to illustrate and complement the text.  Many are unusual, such as the start of the 100m Final in the 1936 Olympic Games (Fig 52), taken before the runners have taken their marks, and another taken twenty metres or so after the finish (Fig 60); curiously, it is this picture that tells us what a beautifully balanced runner Jesse Owens was.  Very few would have selected such an image.  Fewer, perhaps, would have selected the image of F.R. Webster at the peak of a warm-up pole-vault, and at his opening height.  But it captures the spirit of the event perfectly - with the crowd, including schoolboys with their caps on, clustered, expectantly, around the landing area, and an official perched precariously on top of a step-ladder to get an eye-level view of the bar.

In many ways it is a companion volume to Why? The Science of Athletics, published two years earlier.  In Why? Webster covers the then current state of research and investigation of all kinds, from around the world, but here Webster takes that information and absorbs it all into usable advice.  He writes that he was guided by two big questions -

“Am I telling the reader all I know about this particular event?”
"Am I giving the information so clearly and simply that there can be no
possible chance of my meaning being misinterpreted?”

He then writes - “How far I have succeeded - or failed - in my appointed task must be left to the reader, and the critic, to decide.”  I think we could safely tell him that he succeeded admirably.

When reading it again, I could feel that Webster was rather pleased with himself.  He had a lot to say, and a suitable vehicle to say it in.  At times, he is even self-congratulatory - and why shouldn’t he be?  This mood reaches its height in his chapter on “The English Summer School Method”, in which he describes his plan to change the whole concept of coaching in Britain, and how he succeeded in implementing it.  Within a few years, similar Summer Schools were held in Finland, South Africa, Canada, and New Zealand.  Indeed, the concept was to outlive him, and was continued after his death by Geoff Dyson, who, with the help of the Royal Canadian Legion, even exported it to the University of Guelph in Ontario in the 1960s, where it flourished for five years.  Under Geoff Dyson many of FAM Webster’s ideals, and even his phrases, lived on, and the concept of “teaching the teachers, and coaching the coaches”, slipped into the common parlance of athletics in Britain.

For half a century after Webster began it, the AAA Loughborough Summer School continued to expose coaches and aspiring coaches to all that was current in the world of athletics coaching.  Even more though, Webster’s success with his Summer School was the direct and immediate stimulus for the creation of the English School of Athletics, Games, and Physical Education at Loughborough College (later, Loughborough University).  And, if even that was not enough, Webster’s Summer School success led directly to the construction of a fully equipped running track, with full field-event facilities, a pavilion, and even a café there.  Webster described it as “the best laid-out ground in England”, and he was enormously proud of it; it was his idea (in 1936), and when Dr Herbert Schofield, the first Principal of Loughborough College, asked him if he could produce plans for it, Webster did so.  This is how Webster described it -

As the outcome of this conversation [with Dr Schofield], and based upon  the plans and
specifications I prepared more or less to amuse myself in my spare time some weeks
later, what is probably the best stadium in England was laid out at Loughborough College . . . (p. 45)

FAM Webster had every right to feel pleased with himself!

Unusually for Webster’s books, Coaching and Care of Athletes also contains an index.

Webster was one of that unfortunate generation who had to endure two World Wars.  He was in his late 20s/early 30s during WWI and in his 50s during WWII.  Governments had more on their minds than sport, or recognising the efforts of those who chose to devote their time to it.  In a later age, however, F.A.M. Webster might well have been knighted for his Services to Athletics.

Coaching and Care of Athletes was sold for 18/- (eighteen shillings)[equivalent to £52.74 in 2016] and was extensively, and very positively, reviewed from as early as July 1938.  Simultaneous with its publication in Britain, it was also published in the U.S.A., but it has never subsequently been published.

Coaching and Care of Athletes

(a) London (b) Philadelphia