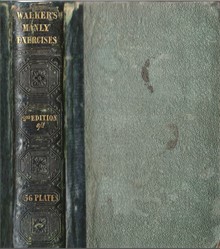 Donald Walker, “British Manly Exercises: in which Rowing and Sailing are Now First Described; and Riding and Driving are for the First Time given in a Work of this Kind”, 3rd Edition 1835.

Donald Walker does not seem to have had any personal knowledge of walking, running, or jumping events, or of training.  He seems to have been a gatherer of information and a compiler, but he is careful to give credit to the works of Johann GutsMuths, Christian Salzmann, Captain Peter Clias, and others who had brought new ideas on physical education and physical culture to Britain in the first part of the nineteenth century.  In his chapter on Training Walker acknowledges the work of Sir John Sinclair, but relies most heavily on Captain Barclay’s chapter in Thom’s Pedestrianism.

The place of Walker’s “British Manly Exercises” in the history of Athletics literature:

Of the 291 pages in this book, only 35 are directly related to Track and Field athletics, or the training for it.  Nevertheless, Walker’s British Manly Exercises has an important place in the history of Athletics literature because it includes an analysis of the skills of walking and running, and Long and High Jumping, and produced line drawings of them.  The book is also important because it proved to be very popular, partly because of its range of topics and because of the 50 engravings it included.  It received such good reviews, and was so well received by the public, that it went into a 2nd edition only two weeks after the first.  Nine further editions were printed over the next quarter of a century, making this one of the most popular sporting books of the first half of the nineteenth century.

Walker’s section on walking distinguishes between the three paces of walking – slow, moderate and quick, and emphasises the mechanical differences between them, the use of muscles, and the usefulness of walking.  He also lists some outstanding feats in walking, and there is a plate showing six positions of the feet and legs (positions that I find hard to understand).  His section on running follows a similar method but also includes a short section on respiration.  His description of outstanding feats of running is rather too general and does not give the impression of having been compiled by an expert, but he does acknowledge that ‘the practice of running may be carried to a great degree of perfection.’  His illustrations of running were clearly not done from life, and the runners feet are barely off the ground!  His jumping (i.e. Leaping) section contains brief details of the take-off and landing for the standing and running High Jump, and for the standing and running Long Jump.  These, too, have illustrations.  The picture and description of High Jump stands shows equipment that was familiar to everyone in a British school a hundred years later.  The section on training has no illustrations and produces no information that cannot be found in Sir John Sinclair’s Collection of Papers on the Subject of Athletic Exercises, or Captain Barclay’s chapter on training in Walter Thom’s Pedestrianism.

British Manly exercises: in which Rowing and Sailing are Now First Described; and Riding and Driving are for the First Time given in a Work of this Kind. 3rd Edition, 1835