A website dedicated to athletics literature / Bredin on Running & Training 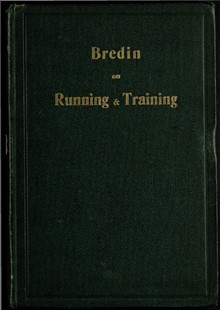 Bredin was one of England’s greatest athletes, winning the AAA Championship 440 in 1894 and 1895, and the ½-Mile in 1893, 1894, and 1895.  Downer said of him (in 1899) that Bredin had “secured as many first class honours as any pedestrian ever known.”  His best times were 440yds – 48½s; 600yds – 1:11 2/5s; and 880yds - 1:55.0, but his running career had a most unusual trajectory however.  After two more-or-less successful seasons as an amateur in England, he left Britain for five years, going to Canada and joining the North West Mounted Police, with no record of any competitive performance.  He returned to Britain in 1892 at the age of 25, and began almost at once to make his mark – he was 3rd in the AAA 440, having led from the start until 60yds from home, when he ‘blew up’, but one week later ran 400m in 49 4/5 in Paris.  He ran for London Athletic Club, and after a run of successes rarely equalled in the history of British athletics - five AAA titles and British records for 440yds (48½s), and 600yds (twice, 1:11 4/5s, 1:11 2/5s) - he turned professional because he wanted to know “whether I had any claim to be regarded as a good runner”.  In his own words – perhaps “the possession of an AAA championship gold medal, won in a good year, was relatively of small value as a test of athletic merit.”  This speaks volumes for the attitude of athletes towards the professional peds at that time.  He went on to have two more excellent seasons as a professional, with his rivalry with A.R. Downer drawing crowd of over 12,000 (for a single race!).  As a pro he also ran 1-Mile in 4:16 2/5s.

Bredin was something of an adventurer is seems.  We hear of him buying land in Ceylon and becoming a tea planter, as well as spending some years in the Mounted Police in Canada; in 1907, however, he described his occupation as ‘writer, author, sports professional athlete’, but his only other known writing is a contribution to A.R. Downer’s Running Recollections and How to Train (1901).  In 1907, he described himself as being in the ‘theatrical profession’.  He married and immigrated to the USA, and lived in California for a while, but travelled frequently between England, the USA, and Canada (his father was born in Nova Scotia).  In 1930, in his mid-60s, he described his occupation as ‘clerical/office’.  He was born in Gibraltar.

The place of Bredin’s “Running and Training”, in the history of Athletics literature:

It is the tone of this book that is particularly striking.  A sense of frustration and powerlessness in the face of the AAA and its administrators and officials who ran the sport, lurks just beneath the surface of Bredin’s words.  The years of Bredin’s competitive life were ones in which the AAA (founded in 1880) decided what the role of a Governing Body should be, and they decided that it was about authority and control.  The sense of excitement that the athletes of the 1860s had in creating the new sport of amateur athletics had slipped away.  In the space of just one generation the power had moved from the athletes to the men in committees, and they exercised it with a heavy hand.  From the life-time expulsion of William Snook in 1886 for allegedly not trying in a Cross-Country race, to the expulsion of six of its best athletes in 1896 for accepting expenses, the sport felt like a battle ground with the athletes on one side and the AAA administrators on the other.  This book is set exactly in that period, and captures the mood of the age in both the amateur and professional ranks, and from an athlete’s view point.

This is a very personal account; it not a text-book on training and running, it is full of anecdote, stories and opinions, and sometimes sounds as if Bredin spoke his book rather than wrote it.  Readers turning to the chapter on Training will look in vain for details about repetitions and intervals, but will get instead Bredin’s personal philosophy – “I once heard in a village church in Cumberland a sermon preached on the text All roads lead to London,” which to the best of my belief is one that it would be vain to seek for in the Scriptures.  However, there are certainly many roads, in addition to the correct one, leading to athletic fitness …”  Bredin was not a follower of the “one size fits all” philosophy, he believed in an individual approach to training, and even wrote, “from the AAA Championships, held on July 7th, 1894, to the 16th of the following August, when I ran half a mile at Fenner’s Ground, Cambridge, in 1 min. 56 1/5 secs., I did no training of any description, and, in fact, took no exercise other than lawn tennis, although I competed at three athletics meetings between those dates …”  A more detailed account of what Bredin recommended for training can be found in his short chapter in Downer’s Running Recollections and How to Train (see Athlos book list).

Bredin makes frequent references to Nat Perry (his coach) and quotes his stories and his sayings, and Bredin obvious had great respect for him.  Bredin also makes many references to “the Badminton series”.  This was a collection of over thirty books that were published between 1885 and 1902, and so were a current and well-known series at the time that Bredin ran.  They were begun by the Duke of Beaufort, and they present an Establishment view of each of the sports they cover (e.g. Athletics was written by Montague Shearman - an establishment figure if ever there was one), and they dominated sports book publishing for nearly two decades.  Bredin’s many references to these books (and Montague Shearman’s in particular), suggests that one of the motivations that drove Bredin to publish his book was to present an alternative view, perhaps even to demand a right of reply.  Edgar Bredin and Alf Downer’s books should, perhaps, be considered as a pair.  Alf Downer and Edgar Bredin’s books were written within three years of each other’s – they ran against each other - they had careers in the ranks of both the amateurs and professionals - and both were athlete’s view-points - both give detailed accounts of their running careers – and both were independent publications, in the sense that Downer’s book was paid for by a benefactor, and Bredin’s was self-published, so, neither represented any “official” point of view.  Bredin also contributes a chapter in Downer’s book.

There is quite a lot of sly humour here.  For example, Bredin tells the story of a ped race in which all the runners except the local hero, were disqualified for not trying (an obvious dig at the Snook affair in 1886), and his description of a “timing machine” which he had seen in use in the North of England.  An electric current was passed along a wire attached to the starter’s pistol, and at the other end was attached to the worsted (i.e., finishing tape), which was then attached to a clock that showed “minute fractions of a second”.  A wonderful invention, no doubt, but “It may be questioned,” he wrote, “if any innovation that curtailed the number of officials at amateur sports would be accepted without opposition.”

The book consists of three parts –

Quarter-Miling. [Bredin claims to have run over 100 races over this distance, sprinters and ‘striders’, how to run it, starting, pace judgment, running 500yds.]

“Odds and Ends” [amateurs flattered by their times? Pros faster than their times? Electronic timing, watches in whippet racing with a two-second sweep! Track measurement, track composition and local and regional differences, track shape, handicapping, timetabling of events at Championships, pot-hunting, poor crowds and lack of public support for athletics.]

The Governing Body. [bad state into which amateur athletics had fallen, mixing of classes, amateur administrators and officials abused their rights, pot-hunting, expenses, definition of amateur, betting, how does one know if a runner is trying his best? Amateur Athletics is a business like any other, club secretaries as guilty as athletes that were banned, value of prizes, spectators don’t care what the prize is.]

My career as an athlete, with some reminiscences [50 pages on his, amateur career, 15 on his professional career.  Also descriptions of other athletes’ competitions in other events.]