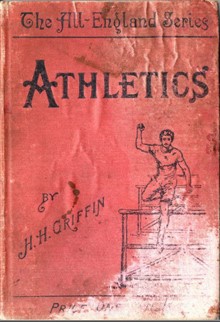 Harry Hewitt Griffin was primarily a cycling writer and journalist, who made his only journey into athletics with this book.  No details have been found of his birth or death, but he published on cycling for 27 years from 1877 to 1913, so he had been publishing for at least 14 years before he published his book on athletics.  A photograph of him in 1885 shows him to be about 40 then.  He would have been his late 40s when this book was published.

The importance of Griffin’s “Athletics” in the history of Athletics literature.

Griffin’s book is probably the first to cover every event; most previous books dealt only with running and walking. The advice on field events is understandably cursory, but less so than the American coach Mike Murphy’s book four years later.  “Athletics” is essential reading for the athletics historian.

The chapter on hammer is surprisingly long, and probably the wittiest ever written on any athletics event.  “There is but one accomplishment which fits in with apprenticeship to hammer-throwing ….. the preliminary stages of learning to play the cornet.  If two beginners would only join forces and go into solitude to practice together, the uncharitable would wish that neither should return.”

Griffin’s book, like most of those written by amateurs of the period, is London-based, and directed towards the Oxbridge group who had brought amateur athletics into existence.  Thus, although he makes cursory references to pedestrianism, he gives the impression that it has all but vanished and ignores the rich and comprehensive athletics culture existing 400 miles to the north. This being said, the specimen programme which he suggests contains an adequate number of field events, in stark contrast to the programmes existing in the Metropolitan area at that time.

“Athletics “is exceptional in offering a vast volume of practical advice on the conduct of a meeting, on its presentation, and even on such details as prizes. “In some sports, one of the prizes was a pair of trousers, made to measure… Prizes of this kind are not allowed by the AAA, and ought at once be courteously declined and reported to that body”.  For the amateur, the unstated aim in prize-giving was to avoid offering anything which might prove to be of practical value.  It is nevertheless worth noting that prizes up to ten guineas were common, at a time when the average wage was around £1 a week.

Griffin’s chapter on meet-organisation is outstanding, and he follows it with technical chapters on all events.  These are written by the champions of the period, men like the Lakeland pole-vaulter Ray, and the hurdler Daft, who describes what came to be known as “the Old English Method”, in which the lead-leg was swung diagonally across the hurdle.  This method obtained in English public schools till way into the 1930s, and can be seen in Tisdall’s 1933 book The Young Athlete.  The high jump section contains a photograph of “the gymnastic roll-over”, which is clearly a primitive Western Roll, a decade before it was attributed to the American George Horine.

Bell, The All England Series.