A website dedicated to athletics literature / Athletics of To-Day 1929 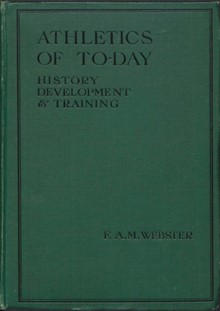 A full biography of FAM Webster, written by his biograndson Michael, can be found here.

The place of Webster's "Athletics of To-day. History, Development and Training" in the history of Athletics literature:

By far the most ambitious of Webster's books to date, this book does pretty much what it says in the title.  He wrote it, he said, -

"primarily for the benefit of those young athletes who do not enjoy the benefits of first-class coaching"   and with -
"a very real desire to place upon record some history of the development of athletics throughout the world."

It was, he wrote,

"the epitome of a quarter of a century of active participation in athletics, combined with personal experience of
five Olympiads and the close study of athletic technique and conditions in many parts of the globe."

Lord Burghley thought he was one of the most enthusiastic people in athletics, and was "eminently qualified" to write on it.  He clearly was.

Webster takes a panoramic view of Athletics here, reviewing the sport's history in detail and plotting its development.  Webster almost always begins his work with history, but he was no historian, and he knew it, modifying his historical statements with such qualifiers as - "it appears", "does not appear", "I believe", "it seems that", "to the best of my knowledge", and so on, but where Webster is particularly valuable is when he reports what he had experienced personally.  Such as how London Athletic Club kept athletics alive in Britain during World War I by keeping the Public Schools Championships going; which, paradoxically, led to British athletes at the post-war Olympic Games doing better than those who had gone before.

Webster's enthusiasm for science is a key feature of this book; his acknowledgement of the work of A.V. Hill (Hill's book, "Living Machinery", was only published in 1927) and his frequent use of biomechanical analysis, and mathematics, not as separate sections but to illustrate and inform all of the events, shows Webster to be one of the sport's important thinkers.  Incidentally, at one point, he refers to a film of a cat being dropped "back-downwards", and turning in mid-air, landing on its feet, and compares it to a pole-vaulter turning to cross the bar; thirty years later, I saw Geoff Dyson show the same film (and, later, a film of a rabbit) to make much the same point, showing just how long some of Webster's ideas had an impact on the sport and how it was taught.

Webster writes of all the events, including some unfashionable parts of it at the time (ultra-distances, and Low Hurdles), and gives technical analysis and training advice for them all.  It is an impressive undertaking, with 368 pages of text, and over 300 illustrations (62 plates and many line drawings in the text, and each plate may have up to 5 individual images).

If this was not impressive enough, Webster includes a statistical Appendix that includes much that is hard to find anywhere else:

Table of points in the Track and Field events of the 1928 Olympic Games (Men, Women, and Combined).