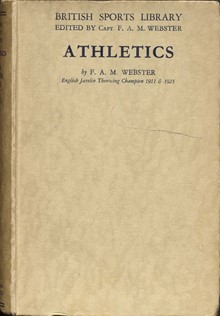 The place of Webster's “ATHLETICS” in the history of Athletics literature:

This is the fourth title in the British Sports Library Series; the earlier ones being - Rugby, by D.R Gent, Hockey, by S.H. Shoveller, and Flying, by W.T. Blake.  All were edited by F.A.M. Webster, and other titles followed.

“Athletics” is aimed at “boys”, “youngsters”, “juvenile athletes”, “novices”, “parents”, ”schoolmasters”, “games-masters”, and “coaches” rather than mature athletes, and it is Webster’s first attempt to cover every discipline in the athletic programme.  He does, nevertheless, also make several references to “mature athletes” and how they might benefit from his advice.

Webster begins this book with a most unusual dedication.  It was to the past, present and future, as represented by three people: A.E. Flaxman, a Hammer Thrower, who was already dead, W.E.B. Henderson, who was the current holder of the British Native Record for the Discus Throw; and Webster’s son, F.R. (Dick) Webster, who was only ten years old, but whom he hoped would “follow worthily in the footsteps and traditions of those who have gone before”.  No pressure there then!  But Dick Webster clearly responded to that pressure, and became the leading British pole-vaulter of his generation, finishing 6th in the 1936 Olympic Games with a British record of 13ft 1½ins. (4.00m)

Like many other athletics writers of this era, Webster warns young athletes not to do too much, or train too hard; and several times he advises that they can practice in their bedrooms.  On p. 164 he even suggests that they “chalk out an 8-foot 2½-inch [2.5m] circle” there to practice the discus - so he clearly had in mind boys with big bedrooms!

Perhaps it is his focus on boys, rather than athletes, that makes so much of his advice now seem light-weight, particularly in the running events, but we should recognise that in much of what he wrote he was attempting to break new ground, for he was writing as a teacher, rather than as a coach.  On one occasion, for example, he writes (p. 162) that something was “hard to understand and still harder to explain.”  All language changes, and not least the language of athletics, and the 21st century reader needs to take a little time to get used to it.  Whereas we might refer to the leg that a runner runs in a relay, Webster refers to each leg as a relay.  We hear about “Shacking”, about the Swedish style of Javelin Throwing, female bamboo vaulting poles, and an unstringed course for the Quarter Mile.  We also learn that the best javelins are made from the “best sunshine layers of the Finnish birch-trees”.  He calls the plural of discus, disci, and advises that the best are also made from “Finnish birch”.  Webster also thinks that Scandinavia is the model to be followed in many other areas of athletics too.  But it was not only language that separates us from the world that Webster was trying to change; this was a very different athletic world from ours, physically.  Apart from the strings between the lanes, relay runners had no zone in which to accelerate before entering the exchange zone, pole-vaulters could not automatically expect a box into which they could plant their poles for take-off, so had to be prepared to dig a hole, and the high-jumpers and pole-vaulters landed in sand-pits, and the runners ran on cinders.

It is easy, of course, to be wise after the event, and to forget that more than 90 years have passed since these words were written, but it is hard not to raise one’s eyebrows when Webster writes that it is “improbable that Earl Thomson’s 14 2/5s [120yds High Hurdles] will ever be beaten”; it was actually beaten in 1931, and by 1971 had been reduced to 13.0s.  But perhaps Webster was right - had facilities and equipment, and knowledge and expectation, stayed the same as Webster knew, perhaps athletic performances would not have improved; but one thing we learn by reading these old authors is that athletics does change, just as the world in which it takes place, changes, sometimes subtly, often fundamentally.  Values and judgements change too; I was surprised to read that the alternate-hand baton-change, which removed the necessity for relay runners to change hands with the baton, was already in use by 1925; its use is now virtually universal.  Webster, however, wrote it was “not supported by the best of the foreign or the other British coaches,” but does not explain why.  There are, however, some fascinating titbits to be picked up amongst the mass of information and advice; we learn, for example, that “most discus and hammer throwers are extremely good dancers”, and that “many javelin throwers are very efficient tennis players.”

There are eighteen chapters arranged in two sections - Track Events, and Field Events.  In most, he takes time to give the laws of the events, the times/distances involved, and the weights and/or specifications of the implements used; always cautioning against the boys using senior-weight implements.

Unusually for Webster, the book contains no photographs, but instead it has a series of line-drawings by A.W. Close; on three occasions he identifies the athletes from which the drawings were taken - Viho Niitymaa (Finnish Discus Thrower), Ville Pörhölä (Finnish Shot Putter), and William Björneman (Swedish Long Jumper).

The eighteen chapters are as follows -

(Training, a sprinter moving up, vs a distance runner moving down).