A website dedicated to athletics literature / Athletics and Football (extract) 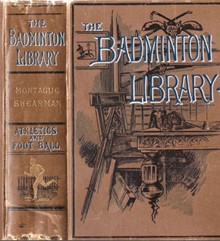 Sir Montague Shearman (1857-1930).  Shearman was a founder of the Amateur Athletics Association in 1880, served as Secretary (1880-1883) and as President until his death in 1930.  Victor in the Oxford-Cambridge match 100 yards (10.2secs) in1876, and in the 1880 AAA Championship 440 yards (52.2secs), he was also an Oxford rugby “blue”.  Shearman was called to the Bar in 1881, and served on the Midlands Circuit for twenty-two years before becoming Queens Council in 1903.  Ten days before his death, he instructed his solicitor to leave £500 in his will to the AAA, towards the construction of a National Athletics Centre.

Walter Rye was twice the winner of the AAC's 7-Miles Walking Challenge Cup, in March and August 1867, the latter by a walk-over. He also set best amateur times for the 1-Mile Walk, the 2-Miles Walk and the 3-Miles Walk. As a runner he won the half-mile in the National Olympian Association Meeting at Crystal Palace, London, in 1866. He was a solicitor in London and a self-publicist, who described himself as "the Father of Paper-Chasing", and as "the Father of Cross Country Running". There are other, and better, claimants to these titles, however; see Roger Robinson's essay on The Young Sam Butler. He also describes himself as "an antiquarian" and wrote over 80 titles on historical topics - mainly lists accumulated from library searches - all of which he published himself. This contribution to Montague Shearman's book seems to have been his only venture into commercial publishing.

The place of Shearman’s “Athletics and Football” in the history of Athletics literature:

This is a book which is essential reading for the athletics historian.  Shearman lays no claim to providing a comprehensive history of athletics, but this is one of the few works of the 19th century which attempts to sketch the history of the sport in England prior to the establishment of the AAA in1880.  I use the word “sketch” advisedly, for Shearman rambles unevenly through the pre-19th century period, (ending his account of pedestrianism around 1860), and ignoring completely the main source of modern track and field, the Scottish Highland and Border Games.

It is, as I have said elsewhere, dangerous to view the past through the prism of the present. Shearman was a man of his time, and his book is not only witty and erudite, but also gives us a vivid picture of English amateur athletics of the late 19th century, indeed a unique one.  It is probably the greatest work of its period.

Elegantly and wittily written, “Athletics and Football” provides us a unique snapshot of amateur athletics in the final quarter of the nineteenth century, but nothing so clearly outlines the divide between the amateur and the professional, and the double-think which almost invariably pervades the discussion. For Captain Barclay-Allardice, who probably earned more from his athletic endeavours than all of the professional athletes of his period put together, is in Shearman’s eyes an amateur. He can be no other, for he is a gentleman, regardless of the vast sums he has earned as an athlete.

But Shearman is a creature of his time.  “The difference between the old style of London athlete…. and the modern athlete from the provinces is not one of locality, or yet of degree- it is a difference of class.”  For, though he avoids saying it directly, there is no question that he would have preferred athletics to be devoid of “mechanics, artisans and labourers”. And Shearman clearly dislikes not only records, but prizes of any kind, with a particular loathing of “pot-hunters”; athletes who go around trying to pick up prizes.

Nowhere is the confusion of thought amongst amateurs more clear than in the issue of prizes. Most of the diet of amateur athletics at that time consisted of handicap meetings, for which at the outset cups and medals were given.  But athletes soon objected, observing that that cups and medals were appropriate for championship meetings, but not for handicap events.  Administrators grudgingly changed tack, but offered only prizes to which an EPNS plate describing the event could be attached.

This naturally limited the type of prize to products such as clocks and barometers, and soon there were objections, and the EPNS requirement was soon shelved.  But no athlete dared return his prize to the shop whence it had been bought, replacing it with something more to his taste; that immediately made him a professional.  So also did selling it to a friend. Behind all of this lay the unstated principle that no athlete should be permitted to win anything of value; anything that he actually wanted.  That was not the way of the amateur.

The origins and nature of the harrier-culture which was to blight the development of the technical events and the growth of coaching is evident even in these early writings.  For, outside of Oxbridge and the Public schools (where athletics was still essentially a winter sport) the competitive diet of the amateur was almost exclusively handicap running-events, and this was to obtain until well into the 20th century.

The clubs, many of them based in the industrial towns where the bulk of the population now lived, usually built their club-houses on the fringe of open country.  Their roots did not lie in Lakeland or Highland Games, and they owned no tracks, no facilities for field events.  Paradoxically, it was the East Coast of the USA which was to benefit most from the Highland Games.  There, Scots Games athletes like William Goldie and John Graham brought a comprehensive programme of track and field athletics which was later to form the basis of the American collegiate programme.

Montague rails against the pot-hunting and the betting which pervaded amateur handicap-meetings.  He ignores the fact that no athlete wanted to win a cup or medal for a handicap-event, and that spectators would soon have tired of scratch events won by the same runners.  And handicaps had come from professional athletics because they not only attracted spectators to the spectacle of scratch-runners ploughing through the field, but also that they offered them an opportunity to bet.  But behind everything that Shearman writes, the elephant in the room is that he would prefer that his class compete against others of their own class, those possessing similar public school values as himself.  That speaks from every page.

“Let modern athletes be thankful that they are trained under a different system” - thus Shearman dismisses the Barclay training-methods, a view echoed in most of the works written by the amateurs of the period.  His views on training, coloured by his own practical experience as a national-level quarter–miler, are exceptional.  Shearman’s book is not concerned with athletics techniques, but rather descriptive accounts, for coaching was still some way off, and there are as yet, despite the work of Muybridge, no sequence-drawings.  A single high jump sketch does, however, show what is clearly a primitive Western Roll almost twenty years before the American George Horine, who is credited as its creator.

Shearman’s book shows how difficult it was going to be for anyone to enact positive change in the definition of the amateur, steeped as the sport was with the values of the public school.  Indeed, from this distance, it shows that any change in the amateur/professional situation beyond the United Kingdom was also going to be difficult to enact.  This was because the world had been sold on the British amateur ethic and fresh disciples such as the American Avery Brundage would soon loom on the horizon.

Rye's section on Paper-Chasing and Cross-Country Running is largely a personal account of its history from 1867, plus some notes on how to set a paper-trail, clothing and the characteristics needed to be a Cross-Country Runner. He is pessimistic about the future of paper-chasing, largely because of his already old-fashioned views about the demise of the gentleman amateur in the face of the "mechanic, artisan and labourer". He describes one team of Birchfield Harriers as "a well trained, if rough, team".

*Longman’s, Green, and Co. Part of The Badminton Library of Sports and Pastimes. **Little, Brown, and Co.