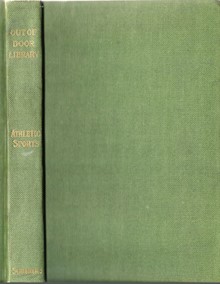 Dudley Sargent (1849-1824) was one of the most important and influential of all physical educators.  R Tait McKenzie called him “a pioneer, a thinker and a scientist”.  In his youth Sargent spent three years using his gymnastic skills as a circus performer.  He earned his Doctor of Medicine degree from Yale Medical School in 1878, and in 1879 was appointed Director of the Hemenway Gymnasium, a post he held until 1919.

The importance of Sargent’s chapters – “The Physical Proportions of the Typical Man” and “Physical Characteristics of the Athlete” in the history of Athletics literature.

Although Sargent’s primary interest was the development of all-round strength and fitness for everyone, he brought new techniques, equipment, scientific rigour, data collection and analysis to strength and fitness training, which proved to be extremely popular with athletes.  For the first time we get detailed physical and anthropometric data on some of the leading athletes of the day. This paper was the direct response to an initiative by the American Association for the Advancement of Physical Education to appoint a Vital Statistics Committee and to encourage the collection of anthropometric data, looking for “ideal types”.  What it revealed, was that different body shapes and sizes were associated with success in different athletic disciplines.

“The Physical Proportions of the Typical Man” first appeared in Scribner’s Magazine, June, in 1887, and “Physical Characteristics of the Athlete”, in Scribner’s Magazine, in November 1887.  Both were modified slightly for publication in Athletic Sports.  For our purposes, the first chapter is of interest because it describes his equipment and the methodology of his analysis that he applies to athletes in the second paper.  It also provides the base-line data, collected from one thousand student subjects collected over a 17-year period, against which the athletes’ data are compared.  Sargent analyses in detail the body dimensions, strength and fitness of some of the best athletes at Harvard and Yale Universities, and although he only identifies them by one of their initials, they can be identified by the details that are given of their performances.  Some are also among the best track and field athletes in the USA, and in one case, Wendell Baker, the world.  So, we have data on the strength, fitness, and body size and shape of -

There is also at least one, and sometimes there are two, good-quality line engravings of each athlete.

Charles Scribner’s Sons. The Out of Door Library