A website dedicated to athletics literature / Athletes in Action 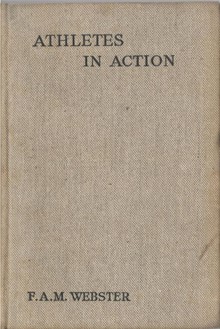 The place of Webster's "ATHLETES IN ACTION" in the history of Athletics literature:

In this small volume, Webster breaks new ground and writes directly for the athletes who cannot find a good coach.  British athletes, he writes, "are not taught to jump, throw or hurdle and are given no schedules to run to."  Surely, things cannot have been that bad!  Nevertheless, it gave him a rationale for a new venture.

Webster produced it as pocket-sized book, created specifically for athletes to carry around with them.  Webster wrote:

the athlete will always take the book on to the training-ground with him, so that he may imitate the attitudes shown in
the pictures and carry out the instructions given in the text.  That is why the book has been made of blazer-pocket size.

The coaching system Webster envisaged, that:

two athletes should work together, one instructing the other acting as pupil, turn and turn about.

And to assist this approach:

they should make full use of the camera, also, and should compare the snapshots they take of one another with the
illustrations given in this book. -

It was a new approach and emphasises the importance of the book's many illustrations. Each skill is broken down into phases, and each phase is photographed, and then the photographs are produced again with all the phases placed side-by-side, to give an idea of the total skill from beginning to end.

An atmospheric head and shoulders portrait of "Captain F.A.M. Webster", wearing a stylish flat cap, is included as a frontispiece.

The book is dedicated to Hugh H. Baxter (the "father of Pole Vaulting", and ex-World's Record holder), who is photographed, "left hand in his trouser pocket", on p. 140, watching F.R. "Dick" Webster, F.A.M, Webster's son.

There are many illustrations; 93 of them are printed individually, and then, in 10 'multiples', they are printed again, but in sequence to give a holistic view of the entire movement.  There are pages of four, five, and six images linked in this way, and some skills are broken down into sixteen photographic segments.  It was a very advanced use of photography.  One of the most striking images is the composite one produced by taking six rapid sequence shots of Earl Thomson (Canada), holder of the World's Record of 14 2/5s for the 120yds High Hurdles, showing the phases of his hurdling action from take off to landing.

The idea of rapid sequence shots, was not new, of course. Sam Musabini had done much the same thing in 1926 (in "Running, Walking and Jumping", (London, W. Foulsham, 1926)) when he inserted an "Art Supplement" into the text, and used rapid-sequence images taken simultaneously from front and side by Eadward Muybridge of running, walking, high jump, standing long jump and putting the shot (they had been taken in the 1870s and 1880s).  Almost all writers on athletics saw the advantage of images to illustrate technique, and they used them when they could; but in suggesting that athletes take photographs of themselves, and then compare them with the champions of the day, Webster took things a little further.

Webster's advice to athletes to, "imitate the attitudes shown in the pictures and carry out the instructions given in the text," is based on the assumption, however, that imitating the stars of the day was the road to success, implying that the best athletes of his era had reached a sort of endpoint of perfection.  Experimentation or innovation was never suggested; "good technique" and "good form" came from imitating others.  That, too, was the spirit of the age.

This text is a good example of the way that Webster places the numerous, well-chosen images at the centre of his text.  He also gives detailed statistical information of the latest results and records.  The book closes with lists of the following records; some, particularly the UAU Records, illustrate Webster's eagerness to look beyond the traditional centre of university athletics in Britain, but this was probably coloured by his being appointed the British Universities' Chief Coach -

*NB.
The publication date is often wrongly given as 1928, presumably because of the name of the publishing company, and because the book itself carries no date of publication, but there can be no doubt about its actual publication date.  Webster's introduction is dated March 1931, the records at the end of the book have entries up to 25 March 1931, and on page 8 he refers to Athletics of Today, “which I wrote two years” (it was published in 1929).  The caption under his portrait also says that he was Honorary Chief Coach to the British Universities Team in 1930.

To make things easier for the athletes Webster printed many of his pages sideways on, with the photographs on the left page, and the explanatory text on the right page, also sideways on.  This had the effect of them appearing to be one under the other when the book was turned 90°.  To get that effect, and to make it easier for digital readers, in this Athlos edition, these pages have been rotated by 90°.