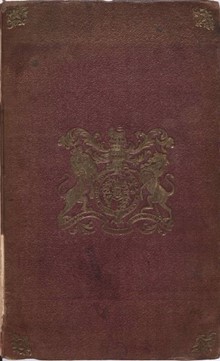 George Roland was born into a fencing dynasty; his father, Joseph Roland, was Fencing Master at the Royal Military Academy at Woolwich, and author of a fencing treatise in 1809.  George Roland was, therefore, walking in family footsteps when he became Fencing Master at the Royal Academy of Edinburgh, and wrote his own treatise on fencing (An Introductory Course of Fencing) in 1837.  In this volume (1832) he also describes himself as the Superintendent of Gymnastics at the Royal Academy, the Scottish Naval and Military academy, The Edinburgh Academy, and to the Lord High Constable of Scotland’s Body Guard,* and he also had his own private class-room at 86 South Bridge Edinburgh, in which he gave lessons.  By 1854, however, he also described himself as ‘attending’ The Edinburgh High School, The Edinburgh Institution, Merchiston Castle, Blair Lodge Academy, Loretto House, Musselburgh Grammar School, The Madras College, St Andrews, The Athenaeum, Glasgow, and in August and September, Bramham College, Tadcaster, and St Peter’s Grammar School, York.  He still kept his private class-room going in Edinburgh, however.  He was still teaching his classes in fencing and gymnastics to the Royal Academy, the Naval and Military Academy, the Edinburgh Academy and Circus Place School, in 1838 when it was said that he “stood at the head of his profession in this country, but whose fame, he might say, was European.” (Caledonian Mercury 9 April 1838).

* This was the Six-Feet Club.

Further information on the evolution and significance of the six-feet club can be found HERE.

The place of Roland’s “An Introductory Course of Modern Gymnastic Exercises”, in the history of Athletics literature:

The greatest part of the book is about Gymnastics (not surprisingly) and quotes Capt Clias, Col Amoros and others, and is not reproduced here.  What interests us is Roland’s short chapter entitled “British Gymnastic Games” in which he focusses specifically on ‘Scotch Gymnastics’ and the ‘Sottish National Games’, i.e. ‘Putting the Stone and Throwing the Hammer’, for which he gives best performances for a variety of weights and styles – these descriptions are among the first we have.  He also refers to the St Fillans Club (that met at the foot of Loch Earn in the Highlands), the St Ronan’s Border Club (at Innerleithen in the Borders), and the Six-Feet Club (that met at The Hunter’s Tryst in Edinburgh), which had been recently formed, ‘for the express encouragement, practice, and promotion of all national and manly games’.  Their formation was in the spirit of Sir Walter Scott, who re-ignited an interest in the customs, dress and habits of Scotland’s past, though this was sometimes a romanticised view of the past – prompted by George IV’s visit to Scotland in 1822.  His interest in reviving a nostalgically laden version of old, and almost lost, sport, had begun even earlier, shortly after the battle of Waterloo in 1815, when he staged a football match, with a vast number of players on each side, on plain of Carterhaugh, near the junction of Ettrick and Yarrow Water, in the Scottish Borders.  The match could not be brought to a finish, so he proposed another, as the decider, but on a smaller scale, with just 100-a-side, but it never took place.  Roland’s chapter on Scottish National Games grew out of this new interest in reviving (or re-inventing), the old sports of Scotland, and they had already become a source of Scottish pride and identity.

Central to the chapter on British Gymnastic Games, are the performances recorded in the Six-Feet Club.  Roland begins with a description of the weights of hammers and the construction of their handles, and the rules for throwing them.  He then gives the best performance for the 10lb hammer by ‘Mr Scougal’ at the St Ronan’s Club meeting in 1828.  This information was taken from The Edinburgh Literary Journal (October 1829)**, and describes the performance of George Scougal, who was a local butcher.  Roland then gives the best of Adam Wilson’s performances with the 16 lb and 17 lb hammer at the Six-Feet Club General Meetings, and notes his win at the St Ronan’s Club General Meetings also.  Wilson’s best performances for Putting the Stone are also given, and Roland notes that Adam Wilson won these events at the Six-Feet Club meeting and at ‘the Highland Club’ (i.e. the St Finnan’s Club) meeting, showing that these were not purely local events, and that the best athletes travelled to the best meetings to compete as early as the late 1820s.  Competitors at all the best meetings in Scotland must have dreaded seeing Adam Wilson arrive, for Roland comments on ‘his great powers’ as ‘a universal gymnast’, saying of him that that he was not just a hammer thrower, and a weight putter of great ability, but that he also won running and jumping events (and rifle-shooting and broad-sword).  He is, perhaps, the first great all-round Scottish athlete, in whose footsteps Donald Dinnie would follow.  The three clubs he mentioned were -

The Six-Feet Club was formed in 1826 and came under the influence of three giants of Scottish literature – Sir Walter Scott, Prof John Wilson (aka Christopher North) and James Hogg (aka the Ettrick Shepherd).  They were all active in supporting the formation of the St Ronan’s Border Club.  The Six-Feet Club had their first public General Meeting in May 1827 when three silver medals were competed for in throwing and running events.  They had two General Meetings (usually in May and November), but survived for only about ten years.

The St Ronan’s Border Club (at Innerleithen in the Borders), held their first General Meeting (i.e. the St Ronan’s Border Games) in November 1827, and then continued them annually.  James Hogg (a local man) was particularly influential in its creation and supported it all his life.  Their Games included running, throwing and jumping events (plus wrestling), and they still continue to this day.

Less is known about the St Fillan’s Club.  The St Fillan’s Highland Society was set up in 1827, but their first Highland Games were held in 1821, though some sporting events were reported there as early as 1819, but fewer details have survived than at the two other clubs above.  They met at St. Fillan’s Mount, at the east end of Loch Earn.  Highland Games are still held at St Fillan’s today.

** Although this item is anonymous, its style, and its detailed athletic knowledge, suggest that it is almost certainly by John Wilson (aka Christopher North), Professor of Moral Philosophy at Edinburgh University.  This item in The Edinburgh Literary Journal, goes on to describe the best performances in standing and running high jump (‘high leaping’), and singles out Anderson, a tailor from Innerleithen, and Ireland, the most famous jumper of the age.  John Wilson, in his youth, was one of the best long-jumpers in Britain.

George Roland gave out this book as a prize to students who had performed well in the various tests and examinations that he conducted periodically, and he inscribed their name and achievement on the opening fly-leaf.  The book scanned here was a prize to George Gandy who was a student in the Edinburgh Academy Gymnastic Class in April 1838; it was the 2nd Prize in the 2nd Division.  The copy in the Bodleian Library, Oxford, was a prize to A.J. Clais, a student in the Grange Gymnastic Class in September 1844; it was 2nd Prize in the 3rd Division.  Roland wrote a book on Fencing too (An Introductory Course of Fencing, 1837) and he presented these as prizes too; two of these were on sale in early 2015 - one was inscribed as a prize for fencing in 1842, (no other details given), and the other was inscribed to the “Rev’d John Bruce with Compliments from the Author”.  All the others are signed, “Geo Roland”.  Roland’s books were an important part of his promotion and his image, and he invested heavily in them; for example he commissioned four lithographs from Forrester and Nichol in Edinburgh, for his Gymnastic book, and five for his Fencing book.  His Gymnastics book was self-published, and had them printed in Edinburgh by Oliver & Boyd.  He also invested in leather bindings for them.

It is rare for a sports book to be given a fine binding, but so important was Roland’s book (An Introductory Course of Modern Gymnastic Exercises) to his business, his image, and his overall success, he had them bound in brown calf by Robert Seeton in Edinburgh.  The upper cover was blind-tooled on gold with either a small armorial panel depicting a Scottish thistle, or with a large royal coat of arms, with additional ornamental gold tooling in the corners (see image on the Athlos, all books page).  The Scottish thistle image can be found on – http://www.bl.uk/catalogues/bookbindings/LargeImage.aspx?RecordId=020-000009912&ImageId=ImageId=44561&Copyright=BL.  It is not known why some were bound one way, and some another.

Roland also self-published An Introductory Course of Fencing in 1837, but these seem to have been mainly published in cloth covered boards, though also with gilt blind-stamping of either the Scottish thistle, or the royal coat of arms.  A few, now very rare, were bound in quarter red leather.

The author and printed by Oliver & Boyd and Simpkin & Marshall