A website dedicated to athletics literature / An Athletics Compendium 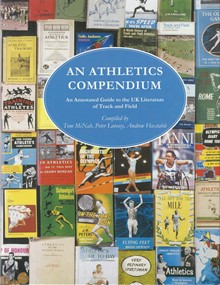 Tom McNab – is the world’s leading authority on the development of late 19th century athletics in Scotland and England, with a particular interest in the development of field events, and of coaching.  Novelist, playwright and one of the world’s leaders in sport, he has coached international athletes, the British bobsleigh team, and England’s silver medal winning squad in rugby’s 1992 World Cup.  He was British Coach of the Year in 1990, and Scottish Novelist of the Year in 1982 for Flanagan’s Run.  In 2012, his play ‘1936’, appeared at the Sadler’s Wells Theatre, played by the Attic Theatre Company, and was described as ‘a powerful, thought provoking, richly rewarding piece of theatre’, by Whatsonstage.

Peter Lovesey - has an unrivalled knowledge of Victorian runners, their performances, and their culture.  His book The King’s of Distance (1968), followed the careers of Deerfoot, Walter George, Alf Shrubb, Paavo Nurmi and Emil Zatopek, and was universally acclaimed, receiving the World Sports Book of the Year Award.  One reviewer wrote - “Peter Lovesey has gained a reputation as being the most outstanding writer on athletics history in the world”.  His Official Centenary History of the Amateur Athletic Association (1979) was received with great acclaim.  He is a world renowned Crime Writer, with over 40 published volumes to his credit, having received the Crime Writers Association Gold Medal, and the Cartier Diamond Dagger for Lifetime Achievement.

Andrew Huxtable - Andrew Huxtable has been a leading member of the international community of track and field statisticians since the 1960s.  He was Secretary of the National Union of Track Statisticians (NUTS), and Secretary of the Association of Track and Field Statisticians (ATFS) for many years.  He is the editor and compiler of many volumes: UK Indoor Track and Field Handbook (1964, 1966, 1971); Best British Performances (annually, 1958 – 1963); Best British Performances of All Time (1961, 1966), A Statistical History of Track & Field Athletics (1990), Rutlish Athletics: a Brief History from 1899 to the Present (1995); and contributor to British Athletics (from 1958), and World Athletics Handbook (from 1970), and much more.

Works are listed under 13 headings:-

There are, 2,482 entries; most are accompanied by an explanatory paragraph.

In the Athlos collection, the entry number in An Athletics Compendium will be given for all works that have such an entry.