A website dedicated to athletics literature / A System of Physical Education, Theoretical and Practical (extract)

A System of Physical Education, Theoretical and Practical (extract) 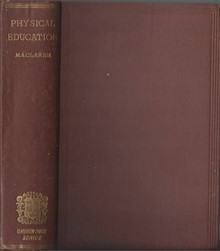 Archibald MacLaren was born in Edinburgh in 1820, and went to continental Europe to study fencing.  Whilst there he came under the influence of gymnastics whose ideas had originated in Sweden, Switzerland and Germany.  He returned to Britain in the 1850s and equipped rooms in Oxford to teach fencing and gymnastics.  So well-received were they that during 1858/9 he was able to build and open a purpose-built gymnasium in Oxford.  It was so successful that it made his reputation, and it became a model for others at Rugby School, Glasgow University and elsewhere.  His methods attracted the attention of the army and in 1860 twelve army NCOs were sent on a course to MacLaren’s Oxford Gym.  This led to MacLaren devising a system for the army "(Archibald MacLaren, A Military System of Gymnastic Exercises, and a System of Fencing, for the Use of Instructors, London: HMSO, 1868)".  At Oxford, the membership of MacLaren’s gym included women and children, for MacLaren was an educator who believed in the inter-relatedness of mind and body, and the need to tailor exercise to the individual’s needs.  His gym was on two floors, with the top floor taken up with two rooms - a fencing salon, and a room that was dedicated to “modified exercises for young or delicate pupils.”  In 1864 Archibald MacLaren and his wife Gertrude opened a school in Oxford – Summer Fields.  It still flourishes today and has as its motto mens sana in corpore sano.

MacLaren’s life was not entirely taken up with education, physical education and training.  His first book was The Fairy Family. A Series of Ballads & Metrical Tales, which he persuaded an Oxford undergraduate to illustrate – the illustrator’s name was Edward Burne-Jones.  It was published in 1857, but in the 1970s more of Burne-Jones' illustrations were found - 85 of them! Though they are untutored and immature efforts, done before Burne-Jones studied art seriously, they have made MacLaren’s book much sought after.  A copy was on the market in January 2015 for £3,175.89.  MacLaren was part of the literary and cultural world in Oxford, and in 1859 he organised the Oxford celebration of the Burns’ centenary.  Burne-Jones and William Morris practised singlestick, boxing and fencing in MacLaren’s gym and were often invited to MacLarens’ home in Summertown in Oxford.  MacLaren died in 1884.

The place of MacLaren’s “
A System of Physical Education, Theoretical and Practical, in the history of Athletics literature:

At a time when the new sport of amateur athletics was establishing itself around the country, and its Championships was still only in its third year, Archibald MacLaren published this book, which advocated a system of physical education that he believed should be taken up by all schools in the country; that system also included walking, running, and leaping.  His system is not confined to children, however, and he gives some (rudimentary) training advice.  An essential element of MacLaren’s system is ascertaining the status of the child/athlete at the start, so that training can be individualised. To help achieve that, systems of anthropometric measurements are taken and MacLaren relates changes in these measurements to training and to growth and development.  This work prefigures that of Dudley Sargent at Harvard University twenty years later.  Also included, as an appendix, is a table, compiled by the Rev T.H.T. Hopkins, of the best athletic performances achieved in each of the years 1866, 1867 and 1868, by both amateurs and professionals, for walking, running, jumping and throwing events.

The extracts included here are Walking, Running and Leaping.  For walking he emphasises the importance of proper form, but does not address competitive walking.  For running, however, he writes about – training for the performance of some difficult pedestrian feat.  He writes about the mechanics of the running stride (length, rapidity, endurance in continuing them), and about the development of muscular power and respiratory efficiency. “Training exercises for feats of pedestrianism involves much care and unwearied and unceasing application”.  Gradually increasing the work is stressed.  In running a 100yards “rapidity of step is probably the first quality” but for longer distances, “length of stride is probably of the greatest importance.

MacLaren’s advice on leaping is confined in the main to double-footed exercises in the gym, He comments that when leaping for height, jumping over a stick is most common, but he recommends a string.  He also has a section on the Leaping Pole, for Height.

A system of Physical Education, Theoretical and Practical